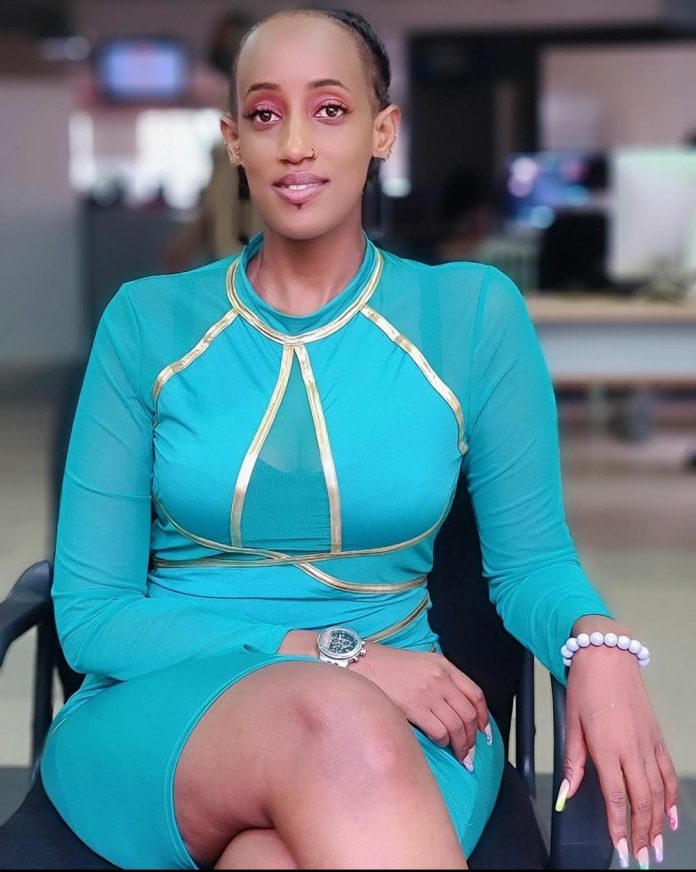 Its a Wednesday, the first of its kind in this third Month of the year and guess what? we are yet again crushing on another outstanding female personality. In our #WCW-Woman Crush Wednesday series today, we feature Television personality Alaine Alya so sit back and relax as you enjoy the read with a touch of her fine mind blowing pictures.

We are pretty sure you have chanced her on your tele before, When one speaks about the new generation of Female media personalities in the land today, its no doubt that Alaine Alya will stand out like a rose in a field of many weeds. Alya presents a lunch time time show dubbed Music Taxi on Next Media’s Sanyuka TV from 12-1:30pm every Monday to Friday. She’s also an often guest host on the weekend Night Dance shows on NBS Television.

Nothing makes a television program more interesting as the beauty that radiates off the presenter and this has surely been the case with Alya, her beauty is overwhelming and always gets people tuning into the local stations just to gaze upon her. Her easy smile adds a bit of colour to our quick pleasantries. As we strolled around looking for the right spot at the Next Media park to conduct the interview, our light chit-chat suggests she is an easy person to talk to, we finally settle down somewhere in the auditorium. Seated across from her, I can see that the TV screen does not lie about her effortless beauty.

Looking for a combination of flexibility and versatility, Alya is an option as well. Aside from presenting on TV, she uses her gracious voice to host events and her recent main headlined event as an MC was the Janzi Awards Ceremony that celebrated outstanding achievements, innovations and diversity in Uganda’s Cultural, Creative and Performing Arts last December. She also hosted one of the most vibrant UG Hope concerts live on TV among many others.

Away from Presenting and emceeing, Alya is also a budding actress, she was part of the cast and team behind the recently released season 2 of the Kyaddala – Its Real series, a production by Reach A Hand Uganda which focusses on social issues that affect young people across the African continent and their attempts to overcome those issues.

Alya’s fashion sense is that other thing that her fans appreciate from her, its what compliments everything about her. When I asked her about what she considers as beautiful for her fashion and style, she had this to say,

“I THINK THERE IS BEAUTY IN EVERYTHING. WHAT ‘NORMAL’ PEOPLE PERCEIVE AS UGLY, I CAN USUALLY SEE SOMETHING OF BEAUTY IN IT”

Alya’s tremendous efforts in all she does has got everything going her way. Away from being natural at what she does, she’s very soft spoken, humble and yet achieving. That just makes it a triple shoot! it feels like margarine over bread right? Congratulations Alya, You are our WCW, your amazing work is promising and we would love to have a glance at more of your creativeness and work.