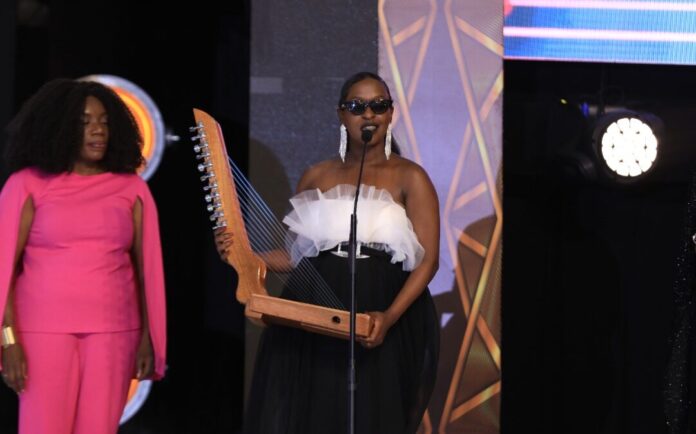 Apparently, it was also an exquisitely entertaining event marked with Pomp, glitz and glam. From the red carpet to the stage, production and audience, everything was on point, Kudos to Steve Jean’s Fenon Events that was behind all this.

In its inaugural year, the 2 days Janzi Awards ceremony, which took place at Kololo Airstrip on Saturday, December 11 and Sunday, 12 December 2021, was hosted by TV star Karitas Karisimbi, Lynda Ddane, Comedian Uncle Mark and Isaac Rucci, and Collins Emeka, Aaliyah and Kayz respectively on the days.

The Janzi awards were officiated by the Gender and Culture state minister Hon. Peace Mutuuzo on Saturday. In her remarks, Sylivia Damalie Owori, the Director of Operations at Operation Wealth Creation – OWC, who ensured the ceremony was successful, thanked the SPD Gen. Caleb Akandwanaho Salim Saleh (RTD) , the Chief Coordinator, for his support of the cause to grow the creative and performing arts industry.

In addition to the awards, the ceremony featured fashion exhibitions by Joram Muzira of Joram Model Management and Sheebah Kassami, as well as performances from cultural troupes and several artists, musicians, socialites and celebrities.

Over 300 creative arts personalities were nominated with 75,000 votes cast at the awards which seek to honor and celebrate artistic and creative excellence of Ugandans in the Creative and Arts Industry. During the Janzi awards ceremony, Moses Matovu, one of the founders of the Afrigo Band, Uganda’s longest-lasting band, received the Lifetime Achievement Award and Levixone received the Humanitarian Award.

The complete list of Janzi Awards 2021 winners is below.

Outstanding song of the year

Male artist of the year

Female artist of the year

Outstanding Album of the Year