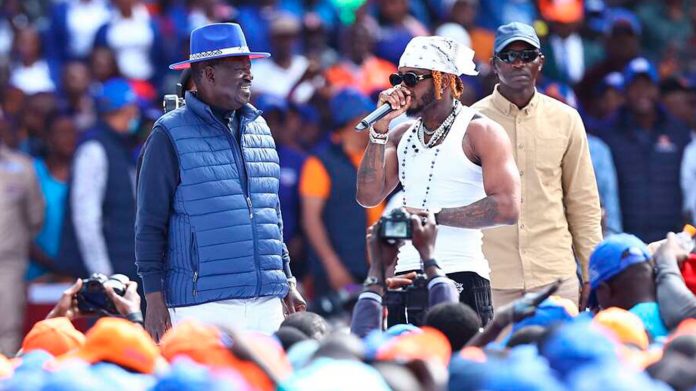 Fresh from reportedly earning millions of shillings during a 30-minute performance in Nairobi, Diamond Platnumz has ranked top of the list of East African musicians with YouTube views. With a cumulative 131 million views on the social media platform, the musician was followed by compatriot Rayvanny with 99.8.

Another Tanzanian namely Mbosso is third with 65.5, followed by Harmonize at 57.6 while Zuchu has 55.3 views. Kenya’s Bahati came in sixth position with 43.7, followed by Otile Brown with 41.5, Willy Paul with 37.9, Sauti Sol 37.7 and Kikuyu gospel artiste Shiru wa GP coming in 10th position with 30.2 million views. YouTube has transformed into a money-minting platform for content creators. It has also helped popularize content by offering an alternative platform to the mainstream media.

Diamond born Naseeb Abdul Juma on Saturday toured Kenya and rallied the youth to vote for Azimio la Umoja’s presidential candidate Raila Odinga. Known for his opulence lifestyle, the singer was accompanied by her daughter Tiffah who had just celebrated her birthday in South Africa. Diamond has sired four children with different baby mamas across East Africa that is in Uganda, Kenya and Tanzania has never shied sharing pictures with his sons and daughter once he interacts with them. Although his love life is rocky, his talent and popularity in Africa and beyond is almost unmatched.