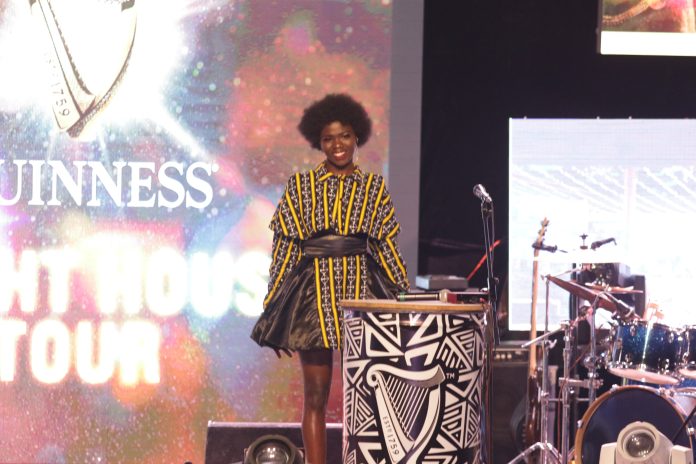 Saturday was a day to remember for creatives in Northern Uganda as Guinness Uganda’s Bright House cast the spotlight on the region’s shining stars.

Launched in August in Kampala, the Bright House that not only celebrates but also provides a platform for creatives to interact with industry leaders in the arts and collaborate with each other is now on a countrywide tour, with Gulu being the first stop. The event that took place at the Innovation Village in Gulu City was a melting pot for creatives ranging from visual artists to painters, recycling artists, musicians, fashion designers, footballers and digital content creators among others.

Drapped in Guinness colours of black and gold, the venue was a walk through the world of art and creativity with exhibitions from Simon Sai_arts, Dorset, Lagen, a fashion showcase from Fixbyoringa and cultural dance exhibitions from TAKs Art Center. Activities kicked off at exactly 3pm with a sports masterclass from coach Agogo, a football star who has over the years skilled many youths and gotten them off the streets to follow their soccer passion.

His presentation was followed by a videography master class by famous music video director and film maker Sasha Vybz who took revellers through his journey of videography and how he prepares for his music videos. He talked about how to make a perfect video which included; developing a concept, studying other videos for inspiration, finding the best film crew, make a story board among others.

After this was an art and fashion masterclass and showcase that saw Gulu’s Fixbyoringa take to the runway in a 10-minute fashion bliss. The young entrepreneur spoke of commitment and consistency as the two things that have enabled her venture successfully into the fashion world. This was later followed by a music masterclass that was moderated by Swangz Avenue’s legendary producer Benon Mugumbya and Gulu’s very own Adongo. Benon created music live on stage while Adongo spoke to the music dreamers about what one can do to stay in the game.

Speaking to the press at the event, Guinness Uganda Brand Manager Prudence Vera Mutembei explained why Guinness is doing the Bright House Tour.

“What we have experienced in Gulu today is what we set out to achieve as a brand. We aimed to create a space where creatives can meet and collaborate with one another, but also a platform that gives us the opportunity as a brand to meet and interact with our consumers as they engage in what they are passionate about,” she said.

As the sun set, creatives were introduced to the night mode of the Bright House that included performances from Gulu’s best acts Polite Mosko, Adongo and DJs Emma and Joel. This upped the tempo for headliner Azawi who performed with her band, giving Gulu a glimpse of the magic she unleashed at her recent album launch.

She kicked off her performance with My year, Crazy Lover, Ache For You, Quinamino, Fwa Fwa, Lo Fit and did other bangers like Repeat It, Slow Dancing and Party Mood, closing her set with Majje, a feature done with rapper Fik Fameica in collaboration with Guinness. The Guinness Bright House is expected to head to other parts of the country next year.