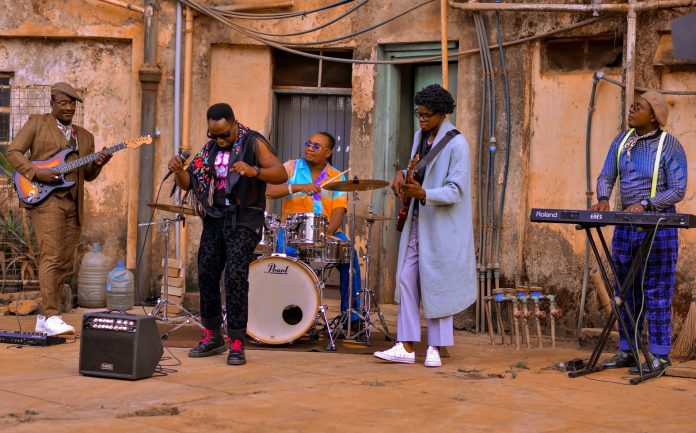 Live music is by nature a shared experience. When you enter a venue to see a band, you automatically find yourself in a group of people you have something in common with. The lights and the noise of the world outside the venue dim and for that moment, all that matters is you and the people at this venue, singing and dancing along to your favorite songs.

Think about the feeling you get when that band plays the first few notes of your favorite song at a show. The excitement and energy in the air are palpable for everyone in the room. Your sense of self starts to slip away, and for a few moments, you become one with the crowd. You feel energetic and almost giddy as you sing and dance with complete strangers. This contagious sense of euphoric connectedness is called “collective effervescence,” a term coined a century ago by the French sociologist Émile Durkheim.

Now in Uganda, there is an integral part of parties which is called live bands. From familiar covers to roof-raising performances, they leave a refreshing taste on their diverse audience. With attention to their collective resilience, Abeeka fuses the art of Live band music performance with our usual circular music to bring something new to our ears, while maintaining the art, quality and uniqueness that band music is known for.

Born around January 2021, something ultra-modern called Abeeka Band was engendered in Uganda`s music industry.
For those who are not much familiar with Luganda, Abeeka relates to an English word homies, or people from home and this band chose to use this name because it identifies them well with their Ugandan fans across the globe.
The band is composed of five members, (Kevin Sekasi, Pages, Dr Tre, Allan Okia and Michael Sebulime),and these boys were initially part of the Janzi band, till when they felt a need of bringing something new to the music scenes.

Below is a video of them performing live at Club Guvnor recently:

No matter how big the crowd is, Uganda’s creme de la creme readily recognise the cool and polished Abeeka Band, even in the dark. Their shows are unpredictable, wild, consistent, and uniquely energetic. Their foray into music has kept them atop the ladder as arguably Uganda’s most pivotal live musical band at the moment.
During one of their recent interviews, the band acknowledged Janzi Band, saying it was a good home for them, for it nurtured and helped them make friends, connections, improve on their experience among other things, but time came when they felt a need of doing something different.

For those who aren’t familiar with Janzi band music style, the group does mainly Afro-fusion music, a traditional kind of music style which talks about historical things.Their originals are basically folk-music-kinda (traditional stories of back in the days).
Since they are youths, the boys (Abeeka) saw a need of creating a new music outfit which can relate with all age groups.
In terms of looks, there is little to differentiate Abeeka from any of the innumerable bands of young lads that Uganda churns out and in October 2022, they decided to venture new teritories by hitting the studio to record their own music which is hoped to change the game forever and emulate legendary bands like the Ever-Green Afrigo Band.

Kevin Sekasi UG: He plays the drums and backs the lead singer. He is also the music director of the band and has worked with several musicians like Isaiah Katumwa, Afrigo Band, Radio and Weasel among others.
Michael Sebulime: He is the lead guitarist of the band.He studied music theory at Makerere university and has played music for almost seven years and has worked with several musicians.

Okia Allan: He is the producer of the band and plays the bass guitar.He has also worked with other artistes who include Bobi Wine, Juliana Kanyomozi, Bebe Cool, Aziz Azion and Maddox.

Jimmy Lubwama aka Pages: He is the lead singer of the band. He gained fame after competing in the Coca-Cola rated next singing competition where he was among the top finalists. Pages has worked with several musicians who include Maddox, Winnie Nwagi among others.

Muhumuza Trevor aka Dr Tre: He is the Keyboard player of the band and has worked with artistes’ life APass, Maurice Kirya, Lilian Mbabazi among others.

For those who wish to catch them live, below is their weekly program:

Monday, they play at The Villa in Bukoto before shaking it down to Balboa in Kisasi on the following day then Karibu Bar in Bugulobi on Wednesdays. Then on Thursdays, Abeeeka perform at Nexus in Najeera and then do the same the following day at Lazio Bar & Grill in Kololo before heading to Badabing on Saturdays. This amazing band closes up their week at The Liquor Shade Bar on Kira Road, just opposite City Oil Petro Station.

How East African Artists Will Make Money in 2023?