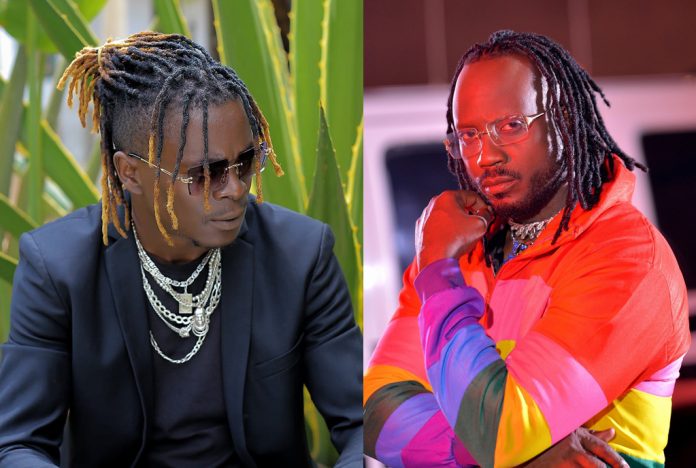 It seems like musician King Saha is not yet ready to let his beef with Gagamel boss, Big Size Bebe Cool slide under the carpet. While appearing in a local TV interview, Saha said that he doesn’t count Bebe Cool as a legend. The Zakayo singer proceeded to name the artists he thinks deserve the legendary status in his book.

“Bebe Cool is not a legend, I don’t consider him one. I know Chameleone, Bobi Wine, Afrigo, Chagga among others but not Bebe Cool,” King Saha.

It should be recalled that for a number of months, Saha has dedicated his time to trolling Bebe Cool. This is despite the Gagamel boss ignoring him. The one-sided beef was started when Bebe Cool advised King Saha to quit drugs. The former Leone Island singer did not take the advice in good faith and has since then resorted to lambasting Bebe Cool. On the other hand, the Wire wire singer has been mute about this matter. It’s even gotten to a point where the fans have also gotten tired of Saha’s childish behavior. He was even left embarrassed while performing at Victoria University’s graduation ceremony.

Saha who was one of the performers during his session tried to troll Bebe Cool but the microphone was cut off as they hadn’t paid for this nonsense. It was Bebe Cool’s son Allan Hendricks who had decided to fight his father’s battles. However, after also releasing a few songs counter-attacking Saha, he gave up. Saha who has made many allegations now runs the beef alone.