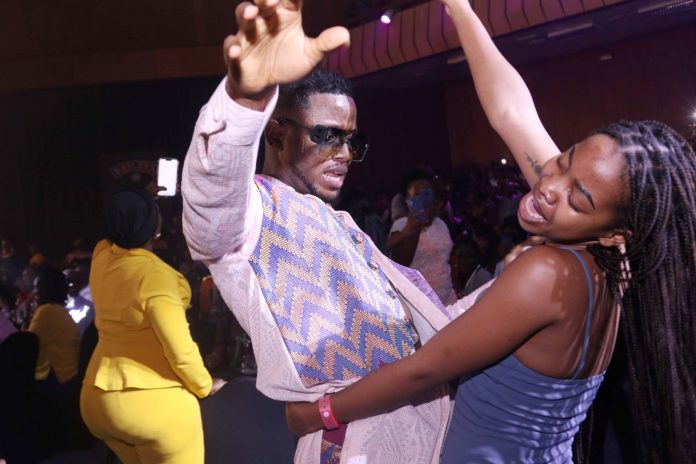 The Night with Chike concert lived to the billing and will arguably go down as the biggest post lockdown concert as of now! He filled the intimidating Kampala Serena’s Victoria Hall and kept revellers on their feet throughout his performance! There was no dull moment at the his concert!

However, the highlight of the night was the exact moment he stepped down from the stage and into the crowd, which sent waves throughout the Serena as girls got to touch and dance with the star. Among those was NTV Uganda’s Mix Show co-host Etania Mutoni who passionately served the Boo of the Booless Album singer a good share of erotic rubs! Etania seemed soo attached to the singer that at a moment, attacked the singer on stage to still prove a point to him and signal a sign to other girls in the house to let go off him, she surely got his attention as he at a point attacked her himself at her table.

Etania’s visible interests in owning Chike’s attention saw other vocal city girls in the showbiz world like Sheila Gashumba lost in there with nothing to do. However, Sheila being the Sheila that we all know had her real self come out to fight for her spot in the singers midst during the after party session at the same venue. After Chike’s perfomance, the crowd was sent into an official after party session with Deejays FEM, Ssese and Spinny taking the party away on the ones and twos. In a rather surprising move, Chike made an appearance in the late night hours and had an upclose and Personal session with some of his fans. A close source revealed that the singer was hunting for Etania who had allegedly left his entire system tantalized and mesmerized!

It was during this time that Sheila made it a point to get the attention of Chike, while at it though, Etania was too on the side stalking the same artiste. The female pair seemed to be in a battle of a sort on who gets the more attention from the Nigerian singer. In a video that we managed to land on, NTV Uganda and Radio City’s Sammy Wetala who was one of the official MC’s of the night and a close Associate of Chike while at the After party seemed to be the go between for the girls in order to reach Chike! In the video, its clearly seen that Chike finally left with Etania leaving out Sheilah Gashumba that had at the time left her boyfriend Rickman feeling out of place only chatting with his friend and manager DT Timo.

Sheila and Etania are fond of seeking closeness with foreign artists that have jetted into the country over the years especially ones from Nigeria. In 2014 during Wizkid’s first show in Kampala, rumor had it that Sheila had a short stint romantic affair with him, the it would be termed as positioning, today that must be typical #Kwetega! Just days back, the same Sheila was seen getting cozy and close to Nigerian Singer Ruger of the Dior fame on all his public appearances.

On the other hand, Etania Mutoni also first rose to fame in December 2017 during a show at Cricket Oval Lugogo when she jumped onto stage and passioantely hugged Wizkid as he perfomed, since then she has never looked back and has kept around the showbiz circles.