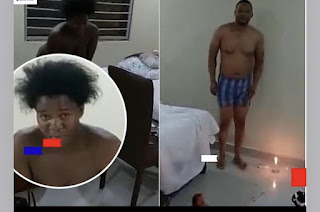 Martha, the pregnant woman who was caught in bed with a pastor, has allegedly committed suicide.

A media personality and tweep with the Twitter handle, Gen Situka, broke the story of the alleged suicide earlier this week.

According to numerous reports, the incident took place in Zambia.

In the video which went viral, Martha was seen naked in bed with another man who was later revealed to be a pastor.

Martha allegedly told her husband that she was going to be seeing her family somewhere (Kitwe). But the husband got home and saw something different.

Since it was a private situation, many people have condemned the husband for disclosing this information, claiming that it should have been handled in a private setting instead.

Others have countered that there is nothing wrong with exposing something for what it is.

Many people have been divided by the news of Martha’s suicide, with some, particularly women, accusing the husband of leaking the video of his pregnant wife having relations with the prophet.