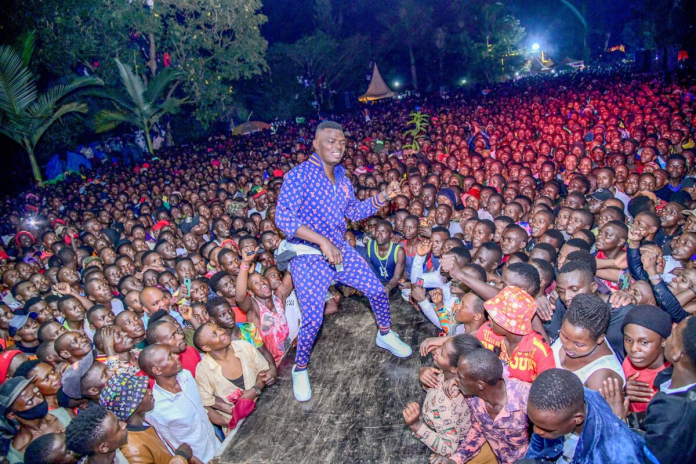 5 years ago, Radio personality and Local Deejay Ssuuna Ben was only known in his home district Masaka and its surrounding, today the tables turned after he beat all odds to have his name recognized all over the country. Known famously for his “Kinyanya nyanya” type of music mixing where he plays songs at a faster bpm (beats per minute), Ssuuna has earned himself a big fanbase that appreciates his craft. True to this, he recently started organizing concerts under the Kinyanya theme and his recently organized show at Joggies Recreation Grounds in Bulenga is one for the books. According to the photos accessed by this platform, Ssuuna gathered a massive crowd that no single DJ in the country’s history has done, mesmerizing everyone. The most interesting bit of this show is that it was a one man show with no artist performances, Ssuuna entertained his fans alone with the help of his brother in the Kinyanya deejaying style, Mbaziira Tonny who hails from CBS FM.

On a rather sad note, the concert that attracted many thousands of fans has since birthed trouble for Ssuuna with police issuing summons against him because the concert is said to have caused deadlock traffic, which police say was due to poor planning. Police alleges that he organized the show without their full proper guidance. “There was a concert in Bulenga that disrupted traffic for five hours. Action has been taken against our officers who illegally involved themselves in this concert. Investigations are ongoing, and the owner of Joggies Recreation Center and Suuna Ben have been summoned to shed more light on that concert that attracted over 5,000 people. It was organized without proper clearance. The whole event was poorly planned,” a Police spokesperson said during the weekly brief.

When this platform reached out to Ssuuna Ben for a comment about the matter, he requested not to speak about it but accepted that he was surely working out matters with the Police. He however went ahead to thank his fans who turned up in big numbers in an exclusive chat with us. This is not the first Suuna Ben pulled out an enormous crowd as even before the Covid-19 pandemic outbreak, he did exactly the same in different parts of this Banana Republic Uganda, this time round it was simply history repeating itself.

Born, raised and hailed in Masaka district, Suuna Ben has always proved a notable figure when it comes to commanding an on-ground following. He kickstarted his career in Masaka at Equator FM befroe he moved to Buddu FM. Towards the end of 2016, he relocated to Kampala and today, he hosts a Weekly breakfast radio show dubbed “Bukedde Butya” and a Saturday Night Music mix show ‘Ekikiri” both on Vision Group’s Bukedde FM radio. He’s also the main Feejay on Bukedde TV’s Full Doze show.