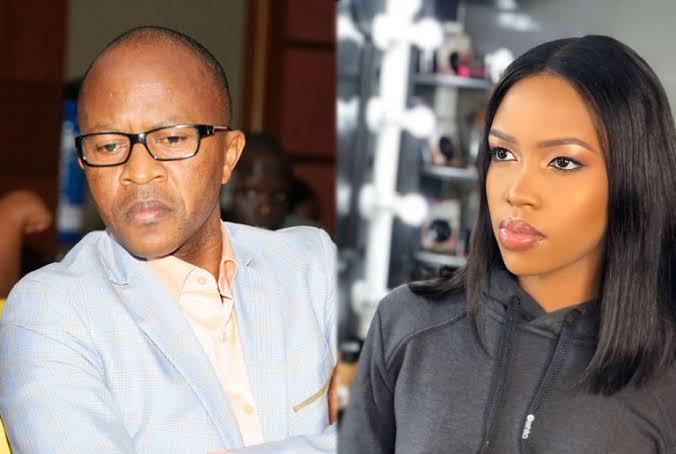 “Daddys Little Girl” – has forever been Sheila Gashumba’s other name. If we have known Sheila for long, we then have known her father Frank Gashumba longer.

True to that, in Uganda, no one knows Sheila and doesn’t know Frank, their’s is a relationship between a shoe and its laces.

To become the Sheila – Gashumba she is, her father has sacrificed a lot through giving his time, attention and resources including putting his reputation on line. To his dismay though, after doing all this for his daughter, the social and political commentator is not a happy man, at least not with his daughter. In a leaked audio recording, Frank is heard expressing his disappointment over his daughter’s conduct.

“Can you imagine I have to fix an appointment to see my daughter? Worse still, if you agree to meet at 2pm, she’ll show up at 5pm,” Frank is heard narrating to Diana in the audio recording that was leaked on Wednesday evening.

In the same audio, Frank further expresses his pain with most of the daughters’ doings that prove her disrespect and disloyalty to him – to him, Sheila sidelined him for pleasure.

In a bid to find where Frank Gashumba’s pain is drawn from – I look back at the Genesis days of Sheila Gashumba into the social scene. A clear look into other kids that shared the same spaces in the media with Sheila Gashumba proves that they are by far ahead of her status wise.

She may be more famous and taking her TV dream higher, but she has failed to evolve over the years into the woman her father hoped she would be.

Today, she is a top tier party animal, one who woes crowds and stages to the very maximum, maybe her father expected better! Maybe? Maybe he hoped that many years later into the media world, she would use her social status and brand widened by the media to branch into other spaces like Politics, the Corporate world among many others.

Starting out as a teen TV show presenter, Sheila in regards to other back in the day kids still seems to lag behind in terms of personal and social growth, leave alone the hype, personal growth – one that would satisfy her father.

Cynthia Tumwine, one of the back in the Day Teen TV show hosts is happily married as of today, to a responsible man, one Frank would too wish for his daughter too, to his dismay though – the daughter keeps changing men from one to another and worst of all, none suits the taste of the man in Frank Gashumba, he terms them “thugs” and likens them to rebel Joseph Kony!

Looking at the young faces of Television back in the day like Humphrey Nabimanya who later grew into a team leader of one of the biggest NGO organizations doing great works amongst fellow young people must be something that triggers Gashumba’s mind to thinking that the daughter could do more, – given a strong foundation he cemented for her!

Although Frank has forever defended the Daughter in the public face, he acknowledged that his daughter is going astray.  As a parent, it was only right for him to protect her in the public but rather criticize her in private.

For many children, Frank might make it seem like their fathers are not protective enough – he will defend the daughter with exaggerated justifications that are out of this world.

In one of his recent daughter defense interviews, he called a presenter to a bet, asking him to name any media personality that is more paid than Sheila Gashumba. In the leaked audio, Frank cries out that Sheila denied him access to all her recent contracts, her NBS TV contract details inclusive. The same went to her earnings, how then did he know that she is the most paid? Contradiction!

He has on several occasions praised her daughter for owning property, recently he tasked Journalist Samson Kasumba to table his land titles before ones of Sheila, if she really owns a couple of them, why then did he claim the daughter is putting her money into waste. In the leaked audio, he explains that he asked Sheila to save a little, and invest more, he however does not know where all her money goes! Contradiction!

What needs to be done by the Gashumba’s?

According to Patricia Luwemba, a Parent-Child relationship coach – “Children start out loving their parents, but as they grow older and discover their parents are human, they become judgmental, sometimes, even disrespectful” – could this be the case for Sheila? She adds that sometimes, when they mature, they forgive their parents, especially when they discover they are also human!

She guides that Sheila should choose humility over ego and become a child, apologise to her father and promise to do better! In the same regard, she carries some message for Sheila’s father – Frank Gashumba. She guides that it’s not only children who grow. Parents do too. She says that as much as parents want to see what their children do with their lives, a time must reach where they let them live their lives, be answerable to their decisions.

In Sheila and Frank’s case, she says its high time Frank let Sheila be, live life knowing her father, who previously cared no longer cares – although it’s somehow risky, it helps children grow up and make right decisions, mostly if they mess and their parents who used to come through for them, don’t – they realize its themselves in control of their lives.

She further states that like earlier promised, Sheila should choose not to discuss the matter on social media because she is further pleasing her ego, which will further hurt the dad.

“In trying to protect herself on social media, Sheila will portray herself as superior and while at it, she will say things that will downplay her father’s opinion about her life which makes more harm” she guided!