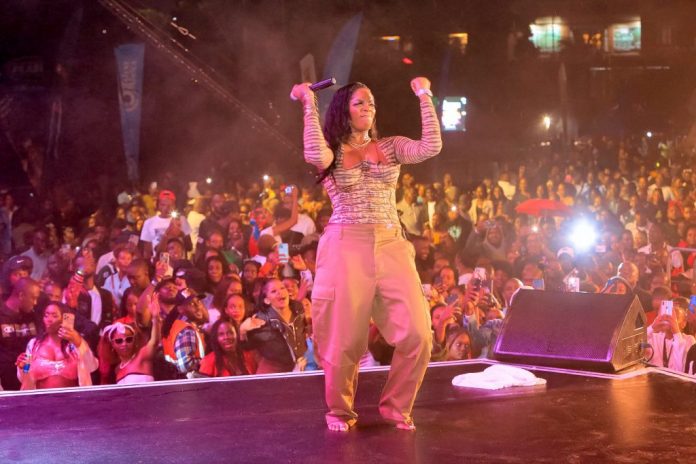 The Nigerian Afrobeats superstar, Tiwa Savage put up a thrilling 90-minute live band performance at the Lugogo cricket Oval on Friday the 29th of July alongside an all female line up of acts.

The eager audience cheered exhilaratingly at the announcement of each performer and sang along to the divas’ songs as each act dazzled them despite the persistent drizzles. As she had promised at the Press conference, Tiwa made sure to watch every performance of the evening in her backstage set, with a deep appreciation for Ugandan female talent and plans of future collaborations.

In order to not miss the moment when “Africa’s bad gal,” Tiwa Savage, went onto the stage, revelers pulled out their phones as the night’s hosts, Deedan and Sheila Salta, introduced Tiwa Savage’s hypeman Jay Breezy, who got the crowd ready for the night’s main act. The audience sang along to her music dating all the way back to “Kele Kele Love,” her debut track that helped her achieve international fame in 2013, making her 90-minute performance worth enduring the evening’s showers.

She left the audience in amazement when she introduced her 7-year-old son Jamil, whom she had been pregnant with the last time she performed in Uganda on Women’s Day, 2015. Dr. Tiwa Savage took revellers to church as she wrapped up her performance with “Somebody’s Son” off
her latest Water and Garri EP that she revealed was written with a spiritual inspiration, from the fact that everyone needs the son of God in their lives.

As the last stop in her Water and Garri Tour, TIWA SAVAGE LIVE IN KAMPALA ended what seemed like a prolonged dry spell in the country with multiple showers of blessings.