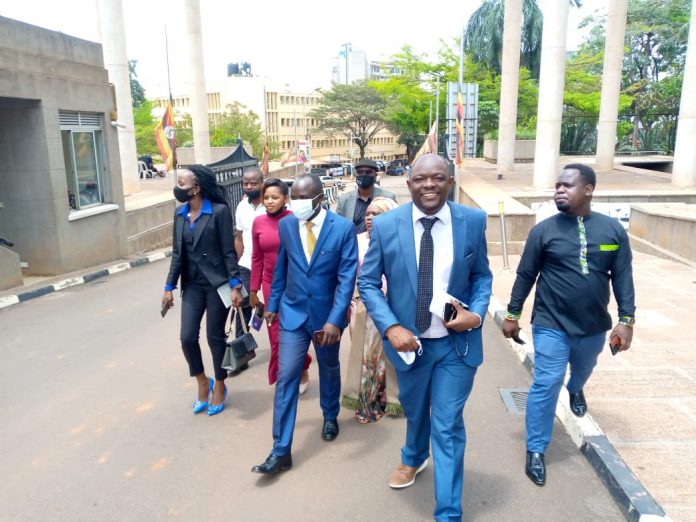 The late Speaker Rt Hon. Jacob Oulanyah has been eulogized as ‘a rare species’ of politician who meticulously served his country with utmost professionalism and integrity.

Since Tuesday, 22 March 2022, several dignitaries including members of the diplomatic corps, Members of Parliament and other political leaders continue to access Parliament in order to sign the condolence book to pay their last respects to the fallen speaker. Oulanyah died on Sunday, 20 March 2022 in Seattle, U.S where he was receiving treatment. His candle burned out just three days to his 57th birthday.

On Thursday 31st March 2022, the Arts leadership under their apex body NCF – National Culture Forum eulogized Oulanyah during their visit to Parliament where they signed in the late’s condolence book. The delegation was led by Charles Batambuze, the Vice Chairperson of the Forum, others in attendance were Emmanuel Mulondo – NCF Executive Secretary, Phina Mugerwa – UMA General Secretary, John Kateregga – NCF Board Member, Artist Ronald Mayinja, OWC Kampala Coordinator Edson Kirabira among others.

Speaking to this platform, Charles Batambuze made sense of how the late speaker was soo dear to the Arts, Creative and Cultural sector in Uganda.

“We in the creative sector, fondly remember and hold in high esteem, the Late Right Hon. Jacob L’Okori Oulanyah for modernizing the Copyright Act, 2006, which he moved as a private member’s Bill. Without his passion and commitment to use his legislative platform to leverage the creative sector, we would probably still be operating under the Copyright Act 1964.” he said!

“The current Copyright legislation incorporated new provisions including: the Office of the Registrar of Copyright; Copyright Information Centre; Collecting Societies and criminalized infringement of Copyright.  Without these provisions, it is impossible to collect and distribute royalties earned by artists and writers from performing right, exhibition and reproduction of their works both locally and internationally.” Batambuze added before saying that they will forever remember his love, passion and support for the arts and the entire creative sector while he still lived.