Home Entertainment News What has to be done to Restrain fans from Assaulting Artistes on...
Facebook
Twitter
WhatsApp
Linkedin
Print 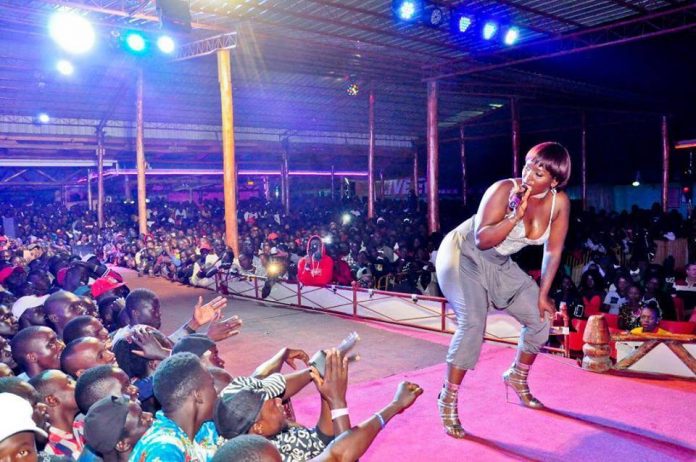 It has become a common vice for fans to do weird things to artistes while they perform on stage. Over the weekend, Singer Eddy Kenzo was attacked by a fan from the audience who poured a coloured liquid onto him while he performed on stage, we believe you have seen that viral video!

On many occasions, female artistes have been harassed through bad touching and some being recorded in a disrespectful manner to portray their private parts. For many, these female artistes dress skimpily in outfits that leave nothing to the imagination! These artistes however claim to feel comfortable in such outfits while performing because it brings out their rightful styles of music, their outfits don’t in anyway call for inappropriate touching or disrespect!

Socialite and model Judith Heard has revealed that interventions need to be done to refrain fans and artistes from getting into close proximity with each other. Following the Eddy Kenzo incident, the socialiate had this to say,

“We gotta find a way to stop these attacks on artistes, before we lose an artiste on stage or a fan in the crowd. This was a wake-up call. Kenzo was pushed to the limit but this could be turned into some big case,”

According to Edward Sendikaddiwa, an Arts Critic famously known as Eddy Sendi Events organisers need to use barricades to separate the stage and the audience. This way, fans cannot easily get in touch with artistes. These Barriers at events serve several purposes, they help manage and influence the behavior of crowds, to line routes and to prevent fans from crossing over to the easy reach of someone on stage, which puts the person stage at risk of any harm.

The other thing artistes need to work on is to keep on stage all through their performances, sometimes it calls from engagement with the fans something that makes artistes to sometime move to the audience. To their dismay, its from there that they are harmed or assaulted. Singer Mary Bata a few years ago did the unthinkable after she jumped off the stage and fell into fans. What they did to her is a tale she will live to tell.

Lastly, artistes need to up their game on security. Of late, some have gotten body guards who they move with in their midst. These should also take it a notch higher and take center stage on the stages where their artistes perform. This will scare away any fan from the audience with ill intentions of harming the artiste.