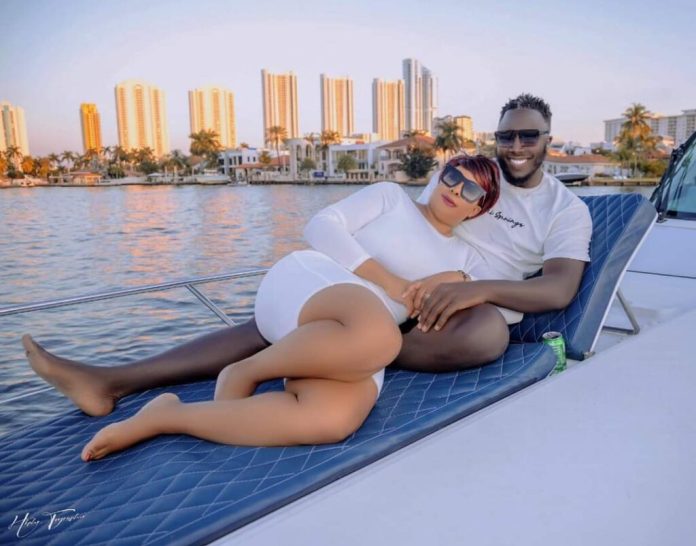 It is no longer a secret of how USA based Ugandan Socialite and entrepreneur Juliet Zawedde aka Boss Bae romantically moved on from ex husband Aurelien Guiembert and hooked up former Ugandan National team Basketball star Jonah Otim and these two fresh lovebirds have publically expressed their love and affection including Juliet buying Jonah a brand new Mercedes Benz AMG GLE 63 as a birthday gift.

In her birthday message to Jonah, she described him as the most gorgeous, caring, sweetest person she has ever met.

“Happy Birthday Sweetheart , You are quite simply the most gorgeous, caring, sweetest person I have ever met, and I wish only happiness for you today and evermore”, Juliet Zawedde posted on her socials beforethis loaded entrepreneur threw a mega birthday for Jonah on Saturday night at Mystique Encore Boston Harbor in the USA.

But Who is Otim Jonah

Otim Jonah is a Ugandan-American former professional basketball player for the City Oilers, a basketball club based in Lugogo, Kampala Uganda.

Over his eight years in the Uganda`s Basketball, this City Oilers legend Otim Jonah quietly dominated the league.

After playing as a backup point guard in Ndejje University Angels, Otim was traded to the City Oilers and carved himself a nice role as an off-ball scorer playing next to Tonny Drieba and Jimmy Enabu. This helped him to be terrific in the clutch, providing shot-making in late-game situations that a player like Ben Komakech struggled with early in his career.

Otim was also known as a game-changer who never failed to come through in the playoffs. He also possessed an accurate jump shot, a skill rarely seen even among guards of his day.

Otim Jonah, often known as OJ, was as well a skilled midrange scorer and passer who could also stop on a dime and confidently drain jumpers. His reputation as one of the first fearless guards to score in inventive ways makes up for the lack of stats that showcase his talents as a scorer. His impact on the game was significant, as many players of subsequent generations took cues from his style.

Otim represented the Uganda Silverbacks Basketball team as early as the age of 17 years after his return from Basketball without Borders camp in SouthAfrica in 2011(BWB) an Academy run by the NBA.

He is also the Sprite Basketball Ambassador, a role that will even get renewed very soon because of his recent philanthropist efforts as aforementioned not forgeting him being a 4 times Uganda and EastAfrica basketball champion with City Oilers.

His Charitable organisation sponsoring street children to go back to school

During the Covid 19 lockdown in April 2021, Otim Jonah who now resides in Boston in the United States chose to open up a charitable organisation named Otim Believes Foundation to sponsor the education of street children, starting with a one Ricky, a young basketballer from Holly Street Basketball Academy; that is composed of mostly the needy and vulnerable children living in and around Kawempe.

“As COVID-19 continues to hit my mother Country Uganda, extended lockdowns and other government measures have severely disrupted my vital work I`m doing with the most vulnerable children and their communities back home but I have to make all ends meet to see how I can help out on the very less privileged”, Otim said at that time.

Otim noted that without access to services that meet their needs, marginalised groups in society are suffering disproportionately.

“Many children now find themselves lacking a safe space to live, a basic education due to lack of school fees or access to basic needs. For girls and children with disabilities, the situation is even further exacerbated thus prompting me to intervene”, Otim Jonah added.

“I`m trying to lobby support from my colleagues, friends and looking for partners to help provide vulnerable children in Uganda with the support they need. From providing essential PPE to delivering food parcels, paying school fees among others. For Ricky`s case who is now in Primary four, I decided to pay his school fees till he finishes his P7 for the start”.

If everything goes according to plan, the foundation further intends to reach out to help at least one hundred thousand children within the next four years. Otim recently said: “We hope this gesture will go a long way in helping not only the students that benefited but also come as a relief to parents or guardians who have been struggling to raise school fees. This sits well with us, as the saying goes, ‘It takes a nation to raise a child.”

Such a Scholarship Otim provided to the young Ricky not only provides student-athletes with financial stability, but they also encourage these student-athletes to learn, which gives them opportunities outside of their field of play.

In August 2021, Otim came out in a fundraising campaign to help Uganda Silverbacks raise $100,000 in preparations for their FIBA Afro Basket 2021 Championships that took place in Rwanda around August 2021.

“I decided to come up with this for the heart and love I have for the sport and my Country Uganda. The Silverbacks just beat one of Africa`s basketball giants Morocco over the weekend to qualify for the finals in Kigali and this is now the right time for each one of us to give a hand and financially help this team which is much challenged for finances after the big covid hit”, Otim Jonah noted at that time.

Otim Went to Shimoni Demonstration School and Kampala Parents school for his Primary school education before joining Lubiri Secondary School for his higher studies. For college or which many know as University, Otim went to Ndejje University on a full Basketball scholarship as he was pursuing a bachelors degree in Accounts and Marketing and he fully graduated in 2015.

After finishing his studies, Otim went on to be use his skills he acquired at the University to fully manage a Pharmacuetical franchise called Eluzia Pharmacueticals Limited that had multiple branches famously known to serve Makerere University students in Kikoni with other branches in Kasanga,Entebbe road and Mutundwe. This franchise was part of the many family businesses he was able to manage.

When he moved to the United States, Otim got enrolled in Chicago State University still on a full basketball sponsorship, and got himself switching careers as he was doing a course in Surgical Technology.

When he fully graduated, he was hired at Brigham and women hospital Faulkner in Boston as a surgical technologist and according to our research, this hospital is the 3rd rated hospital in the whole world.

He also owns sobber living homes abusiness in Arizona and works with the state of Arizon to rehabilitate the homeless people..