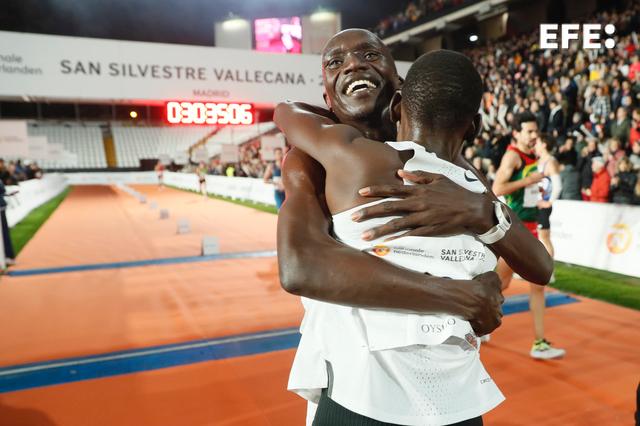 Joshua Cheptegei, world record holder of 5,000 and 10,000 meters in the open air, won the international San Silvestre Vallecana with a time of 27:09, leading Mohamed Katir from Murcia by ten seconds, who kept up with the pace set by the Ugandan until kilometer seven and was unable to revalidate last year’s victory.
Cheptegei, 26, arrived in Madrid after overcoming an injury that prevented him from competing much this year but he did not give up trying to break the test record, held by his compatriot Jacob Kiplimo, who in 2018, with a time of 26: 41, broke the previous record (26:54), which had been held by Eliud Kipchoge since 2006.

The Ugandan athlete, double world champion in the 10,000 meters and Olympic gold medalist in Tokyo in the 5,000, also had the goal in Vallecas of achieving the best mark ever in the 10k, currently held by the Kenyan Rhonex Kipruto, when he ran in 26:24 in Valencia in 2020. He could not achieve either of those two objectives but he fulfilled his favoritism to prevail with solvency at the Vallecas Stadium after a race that he had controlled from the beginning.

The first kilometers were tested by all the athletes until the race was in charge of making its natural selection with three runners who proved to be stronger than the rest. The step in the 5,000 was made in 13:17 by only three runners, Cheptegei, Katir and Jesús Ramos from Madrid, who after that equator began to fall off his head. From that point the duel between Katir and Cheptegei began, although it only lasted two kilometres, the time it took for the Ugandan to change pace and begin to open up the gap with the Spaniard.

The last few meters were controlled smoothly by Cheptegei, who entered the Vallecas Stadium alone, receiving a standing ovation from the large audience that cheered him on when he crossed the finish line. When he arrived, he embraced Antonio Sabugueiro, founder of the race in 1964.
The Spanish army completed an excellent participation in the San Silvestre with Sergio Paniagua (4th), Aaron De las Heras (5th), Carlos Mayo (6th), Ignacio Fontes (7th), Carlos Díaz (8th), Nassim Hassaous (9th) and Juan Antonio ‘Chiki’ Pérez (10th).

Prisca Chesang takes the win in the women’s category
In the women’s category, the winner was the young Ugandan Prisca Chesang, who, at 19 years old, demonstrated her talent on the Madrid asphalt to win with much superiority with a time of 30:19. Second was the Burundian Francine Niyonsaba, fifth in the 10,000 meters at the Tokyo Olympics, who clocked 30:58, and third was Kenyan Beatrice Chepkoech, world champion in 3,000 obstacles, who stopped the clock in 31:06. The first Spanish was Naima Ait Alibou, who finished fifth with 32:36.