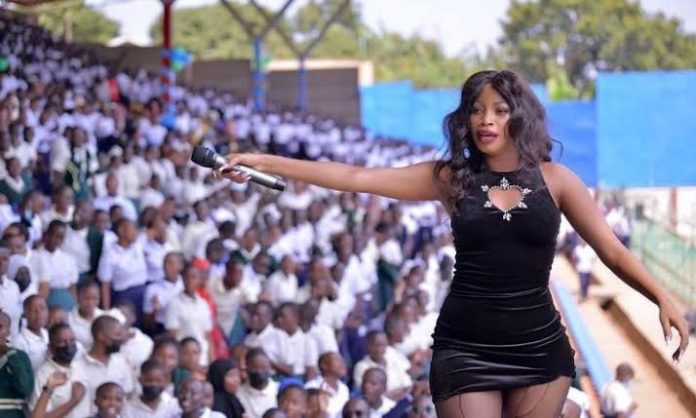 An Opinion by SOLOMON A. MUTAGA

To a contemporary African parent, the title of this article poses a rather terrible and disturbing proposition. In fact, to many, it is a message that is dead on arrival. The point is, it’s such a sensitive topic of discussion.

Now, it is a natural instinct that parents always want to protect their children, help them in all the best possible ways they can. Recent research however, suggests that, if you help them too much, you’re unknowingly hurting them. And that’s the paradox because in essence, the idea should be to, “Prepare your children for the road NOT the road for your children”

This article is not a justification for poor dress code of certain members in society, most certainly not musicians while performing to average age students, neither, is it in support of prevalence of immorality in our society through erosion of our traditional culture. It is not in itself a judge of what good or bad parenting is or should be like (because this is a complex subject in itself), It is rather an eye opener, to throw more light upon the extent to which parents should go while thinking that they’re shielding their kids from the dangers of moral decadence yet they’re only making them more morally susceptible and prone to the same.

With this in mind, think it is high time we had the uncomfortable conversation that, spoiling a child, is equally exposing them to explicit content as it is completely shielding them from it.

In 2018, one of the finest moral psychologists Prof Jonathan Haidt and Activist Gregory Christopher Lukianoff wrote a great book titled “The Coddling of the American Mind”, a book that discusses “How Good Intentions and Bad Ideas are setting up a Generation for Failure” (“Coddling” means “Over protecting”). The authors identify overprotection as being part of a larger trend of the “problem of progress”, a term referring to bad consequences being produced by otherwise good social changes.

They cite results from a study that pointed to the reason for the increase in cases of peanut allergies in American schools by 2008, being as a result of parents and teachers’ protection of children from exposure to peanuts back in the 1990’s.

About the study, Haidt and Gregory write that,

“In February 2015, an authoritative study was published. The LEAP (Learning Early About Peanut Allergy) study was based on the hypothesis that “regular eating of peanut-containing products, when started during infancy, will elicit a protective immune response instead of an allergic immune reaction.” The researchers recruited the parents of 640 infants (four to eleven months old) who were at high risk of developing a peanut allergy because they had severe eczema or had tested positive for another allergy. The researchers told half the parents to follow the standard advice for high-risk kids, which was to avoid all exposure to peanuts and peanut products. The other half were given a supply of a snack made from peanut butter and puffed corn and were told to give some to their child at least three times a week. The researchers followed all the families carefully, and when the children turned five years old, they were tested for an allergic reaction to peanuts. The results were stunning. Among the children who had been “protected” from peanuts, 17% had developed a peanut allergy. In the group that had been deliberately exposed to peanut products, only 3% had developed an allergy. As one of the researchers said in an interview, “For decades allergists have been recommending that young infants avoid consuming allergenic foods such as peanut to prevent food allergies. Our findings suggest that this advice was incorrect and may have contributed to the rise in the peanut and other food allergies”

These authors note that, “the immune system is a miracle of evolutionary engineering. It can’t possibly anticipate all pathogens and parasites a child will encounter … so it is designed by natural selection to learn rapidly from an early experience. The immune system… requires exposure to a range of foods, bacteria and even parasitic worms to mount an immune response to real threats. Vaccination uses the same logic”

Similar to our Social Engineering, there is no way that a perfectly-morally raised child will thrive to adulthood. They must encounter yet surpass immoral setbacks along the way, which they must maneuver by themselves, out of their interpersonal cognition, following their inbuilt moral compass anchored on strong values they got as a child.

In my argument therefore, it is possible that, part of the reasons why there is an increasing level of moral decay in our society today, is because parents have tried so hard to raise their children in an “over protective style”. They think they’re shielding them from immorality, yet all they’re doing is indirectly making them fragile and susceptible to it. They end up not be prepared on how to react to immorality the day they encounter it.

The thought that children will or should grow up in a morally upright environmental surrounding is hence a utopia and untenable dream, given the iGen dispensation.

Secondly, it is a wrong mindset that humanity grapples with to-date. Thinking that the best way to raise a morally upright generation is by throwing immorality out of the window, instead of radically equipping it with strong moral standards, coupled with justification why morality is better than immorality. Certainly, the best way for God to make us become righteous people is not by killing Satan but rather by justifying to his people why he is a better God.

What I see therefore, is that parents are inherently scared. Scared to see that, if the gold they thought they raised is finally subjected to the fiery-integrity-test of the immorality of this world, what will come off on the other side as a product, will be worse than they anticipated. As parents therefore, we are better off grounding our children in strong moral values, while they’re with us, rather than thinking that we’re offering better protection by guarding them from watching immoral content or people. Yes, stopping poorly dressed musicians from accessing schools, will clear your conscience as a parent but not the child from future encounters, it is certainly a temporary solution over a permanent problem, because band aids don’t fix bullet holes.