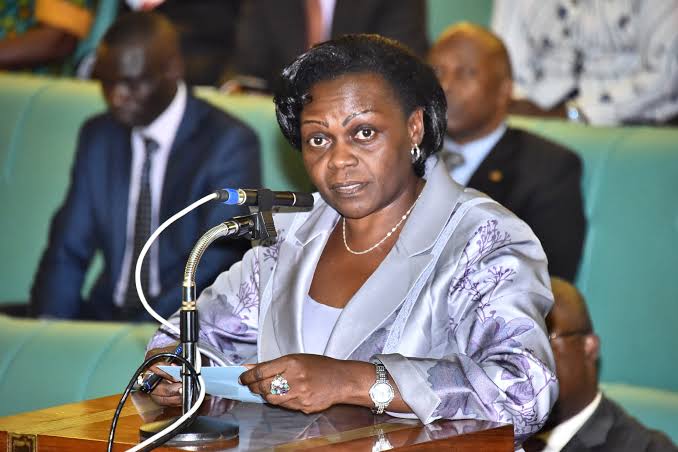 A section of MPs want the Ministry of Education to ban music concerts in schools over what they called skimpy dressing by artists who perform before the students.

This followed a concern raised by Hon. Sarah Opendi, the Tororo District Woman MP, who cited a recent video where singer Sheeba Karungi was performing before students of Seeta High School, a performance Opendi claimed was seductive in nature and called on the Ministry of Education to issue guidelines on how artists should dress while going to perform in schools.

“I also want to find out whether there were no guidelines to govern those concerts and if they are there, I request the Ministry of Education and that of Ministry of Ethics to ensure that these schools are properly guided. If they can’t adhere to the good moral values we expect, can these concerts in these schools be banned? And these musicians that go there must dress decently not to go and seduce our children,” Opendi said.

However, Ibrahim Ssemujju Nganda, the Kira Municipality MP,  raised concern on how dress codes are going to be implemented yet there is no homogeneous standard that is followed in Uganda.

He cited residents in Karamoja who walk around in their community when they are barely dressed in comparison to Baganda. He also cited the Bagisu who circumcise their people naked in public and wondered whether Parliament was proceeding well with its business by trying to impose a dressing code standard in the country.

“I would like to ask whether matters that aren’t of public importance that require an immediate answer from government that are also controversial and have no standard should be raised under this rule because at the end of the day if we have no standard as a country , you can’t tell that the cloth must be of this length and which answer does our colleague require from Government?” asked Ssemujju.

Deputy Speaker Thomas Tayebwa said there was no fault with how Parliament was conducting its business stating, “All of us have children; what goes on in schools concerns all of us, and that is why in schools, there is what you call uniform. You see freedom without responsibility is also another problem and yet we know that by their age and influences in life they need to be guided, we can’t just leave them that way.”

Tayebwa also alluded to another video where students of Lubiri High School were also filmed dancing proactively in the school bus that had been hired from Midland High School, wondering when dance styles have changed amongst the current generation.

At a time where Ugandan artistes are at a point of revolutionizing their industry with clear structures under their midst, few sections of the public domain have however come out to rubbish Hon Sarah Opendi’s rants with claims that the industry has more urgent issues to tackle currently and therefore her currently submissions come off as misguided distraction.

A one industry admistrator took to his twitter and asked Opendi to instead advocate for amending the Copyright Act 2006 to protect Artists rights to remuneration instead of mistakenly advocating for ban of performance by artists in schools, a one assured source of revenue for artists.