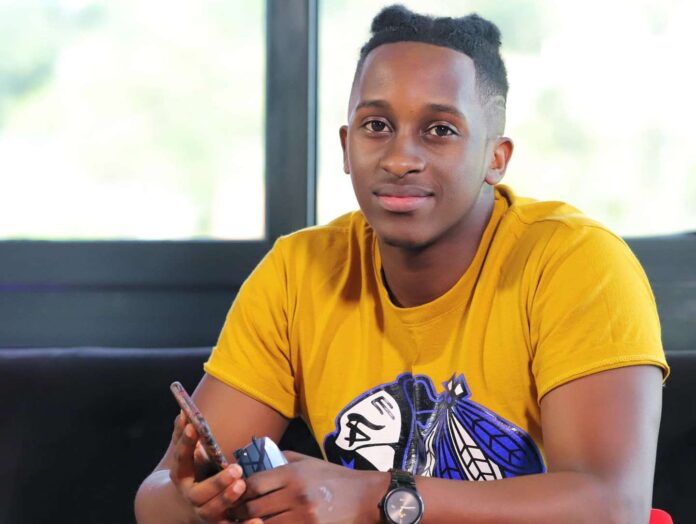 We have seen very few artistes bold enough to stand in solidarity with fellow artistes by directly holding their hands in times of uncertainty, what most of them do is collectively offer help from a distance.

In our #MCM series today, we celebrate Ugandan vocalist Bruno K who amidst all odds has offered himself to walk the hard journey through thin and thick with some artists by directly offering a hand to them thereby creating an impact in them and the public opinion towards them.

In 2018, news went viral of how Big Tym music group singer Oscar had resorted to collecting scrap metals following a short brush off with mental illness, then, no one gave it attention until November 19th, 2021 when Bruno K took to his Facebook calling upon the Uganda Musician’s Association to assist the artist citing that the musician was sleeping in a tarpaulin tent with an ailing leg. He further pledged to hunt for the artist and assist him to find treatment for his leg.

Bruno K, real names Bruno Kiggundu may not have soo much but one thing we are sure of is that the “Omuwala” singer has a big heart full of empathy. In this element, Bruno has managed to gain attention from other well wishers who jump onto his causes to offer more help. Singer Pallaso delivered a token of 1 million shillings off his Range Rover fundraiser campaign to support Bruno’s cause of giving a hand to Oscar.

Another person who picked interest was comedian Patrick Idring famously known as Salvador.

“Bruno K for a man your age, and being older than you, you have taught me what empathy is, you have really humbled me with this gesture…its clear your heart is unique…all doubts have been set aside. What you have done for Oscar (SCAR UG) is just commendable. For the video, just call me- I’ll make a small contribution towards its shoot and production,” he wrote. Salvado went forth and prayed blessings upon the rehabilitated artiste and rallied fans to subscribe to his YouTube channel.

This is not the first time Bruno K is pulling off a philanthropic fete. Last year, he was responsible for giving a group of dancers that were ridiculed by Alex Mukulu on the Yolesa Ekitone Talent show for having a pungent body stench.

Mukulu apparently dismissed the three dancers off the stage accusing them of smelling. “You’re smelling! Your bad odour can’t even let me judge your talent, bye!” Mukulu said to their faces as they shyly walked off the stage in embarrassment. Mukulu’s harsh statements did not go down well with Bruno K. He was so touched – he got so emotional because he had gone through the same distress some time back as an upcoming artiste in a talent search show where one of the judges told him point blank that he would not win the competition by all means. He eventually finished second though many believed he had it all to be number one in the same competition.

“My Boys are finally here. Am going to be a big brother to these boys. Thank you so much Uganda for the contributions towards helping the lads. let’s change their lives together,” the singer announced on his Facebook page upon meeting the trio.

“You should stop these talent shows if you are going to embarrass young lads like this judge did. These young men rehearsed for this audition of course they had to sweat because dancing is intense. Why embarrass them to this bit?” Bruno K ranted.