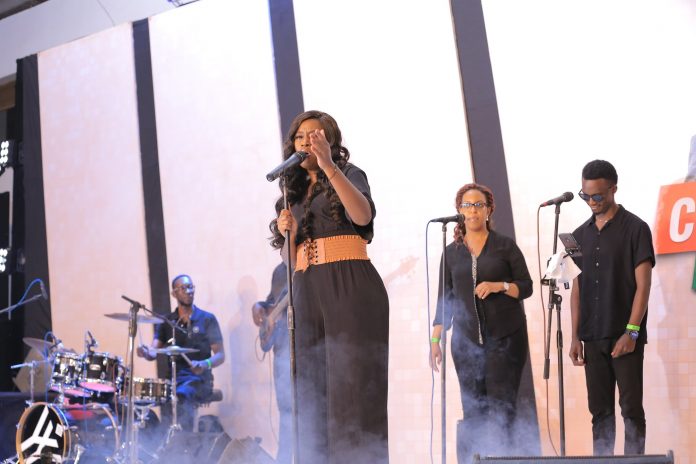 Juliana Kanyomozi, Afro-RnB legend and siren of screens big and small, performed a musical retrospective on Wednesday night at Comedy Store that saw the venue filled to brimful capacity prompting organisers to `chase`  some of the revellers who couldn’t get contained. It was one-hell-of a show to remember indeed.

Juliana`s medley was a reminder of the sheer number of classic and timeless hits she’s provided over the years, and that she’s still one of the most talented Ugandan singers music has seen.

The singer opened with “Kanyimbe,” with set design so glaring, reminiscent of her 2006 PAM Awards dress, the one that gratified a nation and defined how elegantly `Yana` could high-mindedly go. She performed through “Usiende Mbali,” “Kibaluma,” and for the late Mowzey Radio written “Twalina Omukwano,” the crowd stood up to sing with her word by word later—a stunning standing ovation, and maybe the best story in the history of stories, in which she said she never knew she would heal from a love heart break prompting to give the audience “Nabikoowa”.

“It has been an incredible journey of dreaming my wildest dreams and then watching them kind of watching them come true,” she said breathlessly during the end of her performance of “Zaabu”.

Juliana`s memorable and highly amazing performance at Comedy Store came just after a week when Galaxy FM’s `Muzinyi`, radio presenter Nabeeta Nimrod aka DJ Nimrod come out and hit hard again at the singer claiming that she is not a legend as her fans hail her and said she doesn’t even have any trending song- Nimrod was highly misguided indeed.

Legends like Juliana have changed a musical genre forever and have transformed the shape of music and created a new outlet for expression, inspiring lots of other new artists to blossom and become also legends. Such personalities never rely to make hits each month to hold their mythological statuses and they are not so many in Uganda. That’s one of the many points DJ Nimrod missed.

The show as usual was graced by various acts in the Entertainment industry like comedians Mariachi, Maulana & Reign plus guitarist Micheal Ouma and saxophonist Joseph Sax and others.