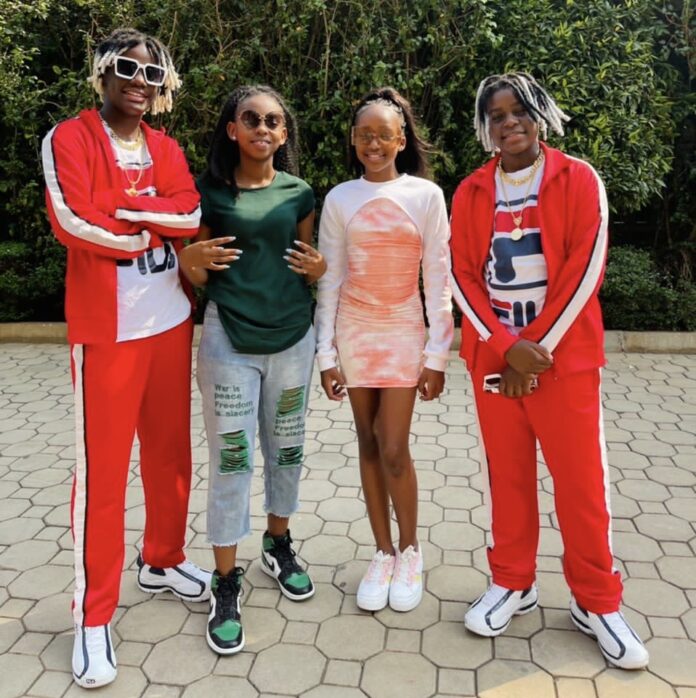 Legendary singer Ragga Dee has unveiled fresh talent in the Ugandan music industry at Mestil hotel in Nsambya where he hugely endorsed them from and stated that they have a huge future ahead. The fresh young talents include music duo E-Iconz comprising of Edmah And Edrich from Johannesburg South Africa, Hlonela Minaye Mrwetyana from East London SouthAfrica and Shivon Dee from Kampala Uganda.

Speaking to the press that had gathered at Mestil Hotel on Thursday mid morning, Ragga Dee officially unveiled the youngsters saying that the talent is in Uganda to do projects that are going to connect Uganda to the rest of Africa and the whole world at large. “They have worked on several music projects already and they have collaborations in different genres like Hip-Hop, Amapiano, RnB, afrobeat amongst others. They have worked with Nessim as the producer on some projects and are here to work with more producers.” Ragga Dee said.

He further urged parents to always allow their children pursue their passions and talents and only guide them to juggle them with their education citing out an example of his Daughter Shivon Dee who juggles school and music at the same time.

13 Year Old Edmah and 11 Year Old Edrich make the E-Iconz. The duo made it to the music scene with their single titled Izinja Featuring Masterpiece Yvk under E-Iconz Entertainment. Izinja was their debut song that came up with good reaction from different African countries including Tanzania where they are looking forward to visit for a full Media Tour and connecting with people from Tanzania and East Africa. The audio was produced by Nessim And Tyler Icu and the video was shot and directed in SouthAfrica. Watch the video below.

Musician Hlonela Minnie Mrwetyana was born in East London, South Africa and discovered her talent as a model at age 5. The 11 year old Model, Actress and Dancer has had several appearances on the stages of the East London Guild Theatre. In 2019 she became the Top Junior Model Ultimate Performer and the First Princess-Face of Miss Teen SA 2019.

Beyond her passion in Modeling, Dancing & Acting, Hlonela loves to help other kids. She loves to see people feeling good and overcoming obstacles. Today, Hlonela is undoubtedly walking her way to becoming a star, a voice, and the next super model out of South Africa.

Shivon Dee originates from a musical background and her joining music comes off as something long expected. Shivon, real names Shivon Mirembe is a daughter to legendary singer Daniel Kazibwe popularly known as Ragga Dee. On why the name Shivon Dee, she says its a combination of her name and that of the dad, she gets the dee from RaggaDee.

When asked whether she joined music to replace her dad, the 16 year old says she joined music because of her talent and passion, she however agrees that her father inspired her too. Shivon has over 20 songs produced and is soon releasing her music, she is working on collaborations with the E-Iconz and has also worked with Producer Imon on most of her projects.

Below are some of the Moments from the Press Conference :