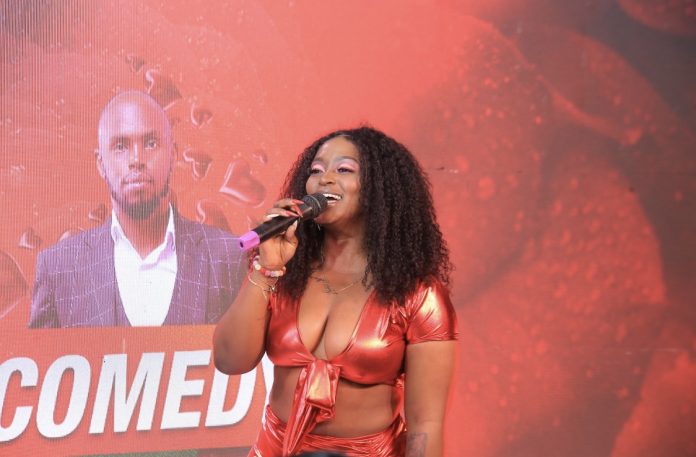 Valentines day revellers at Levels Lounge & Restaurant were served to great entertainment as Swangz Avenue star Winnie Nwagi, the big attraction of the day thrilled them in a great performance at the Comedy Store Stress Clinic themed night.

Clad in a red velvet like two piece attire which had her waist and thighs exposed, her outfit sent the the already excited and hyped crowd cheering the moment she stepped on stage a few minutes after 11 oclock. She performed her hit songs like, Musawo, Amaaso, Mataala and Fire Dancer among others to which revelers sang and danced to crown the night.

It being Valentines day, Winnie Nwagi who is proud of her body and well known for her sexy dance moves used the opportunity availed to showcase what her mama gave her. She must have left married men and those in love forget about their wives and lovers. Prior to her performance, the filled up to capacity levels lounge audience also chanced performances from Songstress Naava Grey, Bruce martin Masaba’s Heavy Band, comedy duos Arnold & Ali breezy, Crazy University, The Talkers, Sunny & Qkamba, Bizonto, Senga Justine Nantume, Maggie the Bwaiserian, MC Mariachi and Meddy Progress the Poet.