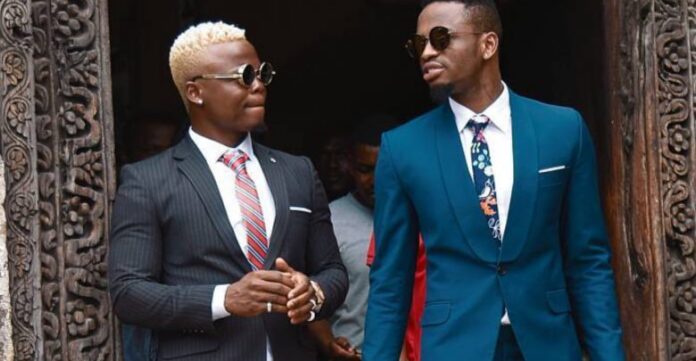 Tanzania artists Diamond Platnumz and Harmonize’s beef is still alive and thriving and the two are seemingly reigniting it with these new escalated allegations.

It all started with Diamond stirring the pot again after Wasafi signee Rayvanny performed during MTV EMAs 2021. Rayvanny made history to become the first African artist ever to perform live at the EMA award ceremony that took place in Budapest, Hungary where he performed alongside Colombian singer Maluma performing the song “Mama Tetema.

In his message of congratulations, Diamond poked Harmonize who has since responded with more allegations against him.

Harmonize quickly responded claiming that while Diamond is busy urging young people to avoid drugs he has been allegedly abusing hard drugs which have seen him lose weight.

“Vijana, pia ukishapokea mamillion ya shilling 600m, ukishavutia unga yakiwa yanakaribia kuisha, ni vyema kuyauliza au kutadai fadhila. Pia vijana jitahidini kutofautisha kipi ni hatari katio ya mihadarati na huo unga unao kukondesha,” Harmonize said, meaning “Young people, once you have received the 600m shilling, if you are attracting flour as it is about to run out, it is better to ask for it or claim a favor. Also, young people, try to distinguish between the risks of the drug and the powder that you are losing. ”

According to sources, Harmonize, alias Konde Boy, felt his brand had grown too big to be contained under the shadow of Diamond Platnumz. Harmonize was forced to pay a handful of cash estimated to be around Tsh500 million (Ksh22.5 million) to be allowed to terminate his 15-years agreement with WCB after four years of working with Diamond.

The 27-year-old was forced to sell some of his possesions to afford the money asked by WCB inorder for him to own his music.

“My contract with WCB stipulated that I pay them Tsh500 million to be allowed to leave the company if my 15-year agreement with them hasn’t ended. That money, the contract said, would allow me to own the copyrights to my name and music produced under the Wasafi outfit,” Harmonize stated.

“I did not have the money, when I decided to leave WCB [in August this year], and therefore, I had to sell my three houses, several possessions to raise the needed Tsh500 million,” he added.

After his 3 months trip in the USA, Harmonize opened up on his trials and tribulations in the hands of WCB management which include the forced payment of an additional Sh100 million and reluctance to let him go.

The singer said that the termination of his contract was a big hustle, despite paying an exit fee of Sh600 million, something that forced him to call for the help of former President John Magufuli’s help. “We had agreed that I pay Sh500 million release clause, I was supposed to pay the money in two installments but after I sold my house and raised the first Sh300 million as agreed, tables were changed,” said Harmonize.

The management declared that he should pay the remaining fees to be released. “Even after I had struggled to raise the remaining Sh200 million, an additional Sh100 million fine was slapped on me allegedly for making appearances at the National Stadium and many other issues,” said Harmonize. Even after the additional Sh100 million was paid, Diamond was reluctant to sign his release papers

“I had to seek the intervention of the late President John Magufuli on the matter. I told him everything and he instructed that the papers be signed,” says the ‘Kwangwaru’ singer.
It took orders from above to block Diamond at the Julius Nyerere International Airport before he could leave for the US. Diamond had to return to the national Arts Council Offices to sign the documents before they could leave the country.