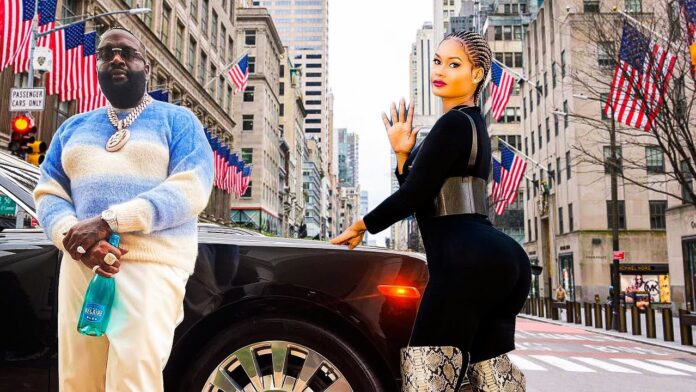 American rapper and CEO Maybach Music Group(MMG) RickRoss and Hamisa Mobetto were spotted getting cozy while sharing kisses in a viral video of the pair in Dubai.

On Thanksgiving (Nov 25) the clip made it’s rounds on social media, as fans speculate that this is the ‘I’m A Boss’ rappers new girlfriend. In mid-September, Ross was asked about his relationship with the model during an interview and he took the opportunity to reveal some details. In an interview with Lil Ommy, Rick Ross said that currently he is very close with Ms Mobetto but will leave the bit of explaining the kind of relationship they have to her.

The Award-winning rapper and businessman added that he is ready to support the model accomplish her dreams, commenting that he had found her entrepreneurial. “I have to be honest, there is a connection, how much you wanna me to tell you about it? I’m gonna leave that to her… But she is such a beautiful person, beautiful spirit and she is a huge entrepreneur and I want to help her take it to the next level because she is doing a great job and I’m proud of her

When asked about Rick, Hamisa had this to say, “I went to Dubai for business and Rick is planning to invest in Tanzania and make it his second home. He is very passionate about our country and speaks highly about it. If there will be anything else, I will let you know. He is so amazing, he is a gentleman. Having fun with him in a club is not a big issue, a man is supposed to take care of a woman.”

But, who is Hamisa Mobetto? Here’s what we know about the star...

Hamisa Mobetto is a fashionista, model, and actress from Tanzania.

The star is also a singer, with one of her biggest tacks being ‘Ex Wangu’.

Bongo Flava musician Diamond Platinumz is the father of her son, which made her gain a lot of traction.

Besides that, she is a go getter and a hard working social media influencer/socialite.

She reportedly went to St Kayumba for her secondary education.

Mobetto has appeared in several music videos and has also collaborated with popular skincare and fashion brands.

Hamisa was reportedly born on 10 December 1994, meaning she is currently 26-years-old.