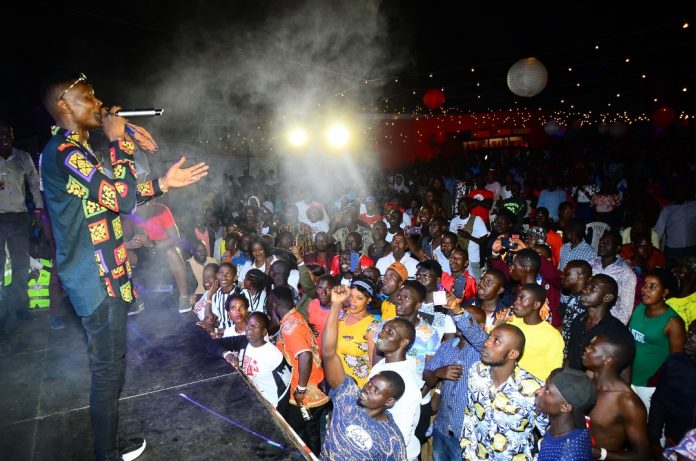 You are probably a young artist or a music enthuasist wondering how artists in Uganda make most of their money.  While some of the artists can easily reach millions of fans via streaming, touring makes up a huge portion of an artist’s life and the lion’s share of the industry’s revenues. At the same time, it is the only part of the music career that remains almost 100 percent  “physical” in what is otherwise the fast growing digital industry. Fans get to have a touch ofsound in the presence of their artist.

However putting together a successful  tour or concert  both local or international  for the same crowd that listens to your music on radio or free download is an extremely complicated process.

What is Live music
Live music” is a term used to describe music, played by human beings in a real time concert. Usually performing on an instrument or with your voice. One is “playing live” when you get on stage and make music there at that moment.

Many would argue that others such as DJs or those who perform either backing tracks are not performing ‘live’ but to my mind as long as you’re not miming it counts. So attending a DJ mixing is also a live set of music.

Despite the rise of digital streaming platforms, make no mistake, live music is still the cash cow of the industry.

According to music analytics  the global revenue in the Music Streaming segment is projected to reach us dollars 26 billion while live music 31billion in the same currency this year. The question is how such statistics break down to the local industry. Well for our economy we bank roll mainly on album launches or a hit wonder song that is cutting across the country. “Baza Baza sang his Onina song over 10 times,” a reveler complained in one conversation I had.

So we contribute a small portion to the streaming revenues though we are moving in a good direction.Nevertheless, the touring industry’s decentralized and network-based system remains a complex landscape to navigate: artists often work with dozens of local promoters, booking agents and venues in the course of a single tour. So, let’s start with the basics and identify all of the parties that are usually involved in a mid-sized tour:

Take an example of the Valentine season that just got done we had lots of artists booked in over 6 shows one wonders how is this possible for one artist.

Key Players in the Touring Industry

Artists and their managers are the crucial elements of the live business.

A manager’s role is to build and coordinate the artist’s team on all sides of the music industry, and that, of course, includes the concert business. The artist’s management usually takes part in the initial route planning, helps the artist pick the touring team, and serves as a bridge between the live entertainment and all other sides of the artist’s career.

The job of the booking agent itself is very easy to define: the agent represents the artist across the live industry. Their goal is to book the tour and sell the shows to the local talent buyers or show owners,  finding the venue and negotiating the price. The booking deal is usually pretty straightforward: “an artist A, represented by the agent B, commits to play an N-minute show in the venue C on the day X for a ugx Y. ” A good agent is the one who is able to get all those As, Bs and Cs right  so that the venue is sold out, but there are no fans left without a ticket; the artist gets paid well, but the promoter doesn’t feel cheated, and so on. While the deal is relatively simple, it’s hard to nail all the details especially given the fact that the show are usually booked from months in advance, depending on the scope of the venue.

Promoters are the side of the live business that funds the tour and sells out the show or buys it. Here you have the common faces like Bajjo events, Baalam and more. The landscape of concert promotion is complex, and promoters themselves come in various shapes and sizes. To make it a bit simpler, imagine that promoter is a middle-man, connecting the concert space and the artist to put together a show. You can start building that bridge from either side, however they don’t work alone. below are the soldiers that make your shows a success.

Tour promoters set out from the artist side, contracting musicians to perform a series of concerts, paying for rehearsals, audiovisual production, covering the travel expenses and so on. Once the show is ready, tour promoters, working closely with the artist’s booking agent, either rent venues themselves or subcontract the shows to the local promoters or a mixture of both.

Local promoters, in their turn, embark from a concert space. Affiliated, or at least connected with local venues and performance spaces, they buy gigs from the agents and/or tour promoters to own the ticket sales. An art-director of a small club, a local group of party promoters, a team of elites interested in local music all those event promoters of different scope would fall into that category.

In that context, the role of the agent becomes clear. If promoters are the middle-men on the side of an artist or a concert space, the agent is the middle-man between the middle-men, who builds up the network of promoters on both fronts and artists, serving as a liaison between all sides.

However, some of the biggest tours today can be put together without the agent’s involvement.  One of the main shifts in the live business is the consolidation of tour and local promoters under the umbrella of entertainment conglomerates like Abittex forexample must have over the year built a network of compitent team or even owns some of the venue spaces.

Tour managers that stay on the road with the artist’s crew are the oil that makes the wheels of the tour spin. these are usually part of the Artists managerial team especially if they are signed to a music label. Even just a  tour within the central business district of Kampala  involves extremely complex logistics, and it becomes exponentially harder to manage the movement  as the tour passes onto nation wide and an international level. unlike abroad here most of the sound systems and even djz are sourced by local promoters and the artist is a climax of the show.

The goal of the tour manager is to make sure that the money doesn’t go down the drain when the artist’s car breaks down on the way. Getting the team  from point A to point B seems to be a pretty straightforward job, but in fact, the routine of the tour manager is dealing with unexpected and solving a dozen of new problems each day all while keeping the artists happy and ready to perform.

This is the first story of on understanding music business in regard to tours. next we discuss the cycle of events that go down