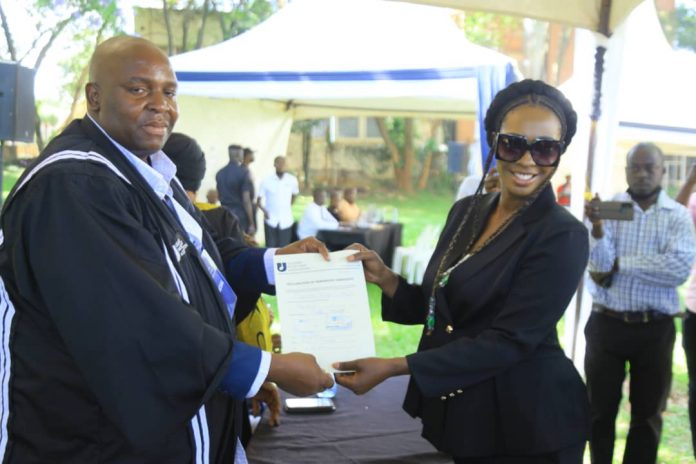 Uganda Musicians Association‘s electoral body on Monday started to nominate candidates of various positions for their general elections of their 2022 – 2024 term.

Mr Geoffrey Ekongot, chairperson of the UMA – Uganda Musicians Associations Electoral Committee, said 22 aspiring candidates have been verified and cleared for nominations on day one of the nomination exercise held at the National Theatre Gardens in Kampala.

On Monday, Day one of the nominations, a total of 20 candidates from the four lots of positions for office were dully nominated and the remaining ones are expected on Tuesday 12, April 2022 which is the second and final day of nominations. For the top executive position of Presidency, Ssemanda Mansul AKA King Saha and Cinderella Sanyu AKA Cindy were nominated on Monday. Maurice Kirya who was expected to join the race backed out at the last moment!

“I Geoffrey Ekongot, being the Chairman Uganda Musicians Association Electoral committee, pursuant to the Article 3(8) of the UMA Constitution and Article 9 of the UMA By-Laws declare, Mansuul Ssemanda, dully nominated as candidate to contest for election as President” Said UMA Electoral committee chairman as he nominated King Saha, the first presidential aspirant to arrive for nomination.

For position of Vice Presidency, all aspirants were nominated on the first day and these included Kusiima Irene, Hanson Baliruno Madela, Sadat Mukiibi AKA Kalifah Aganaga, Allan Hendrik AKA Pepper Daddy and Ojambo Andrew AKA Daddy Andree. The position of General Secretary had two aspirants, Phina Mugerwa Masanyalaze who was fully nominated on Monday and Ssempijja Dan AKA Omukunja Atasera who was nominated on Tuesday. In a turn of events, Allan Toniks joined them for the same postion.

Another position on the Executive Board is Treasurer with various aspirants. Of these, 2 were fully nominated, George William Kigozi AKA Geosteady and Kyaggambirwa Geoffrey AKA Chagga. The remaining 3 that were earlier expected to appear for nomination on Tuesday include Nkoyoyo AKA Yoyo who backed out of the race, Mugwanya James Robinson and Ampaire Allan AKA Allan Toniks who switched positions and got nominated for General Secretary on Tuesday.

Those nominated for Special Cluster Representatives included Irene Namatovu for Women, Muyinda Ramah AKA Baba Raa for Youth , Junjju Isma AKA Jajja Galaba for Youth, and Nakisige Shamim AKA Nakiss for Youth.

Genre Representatives positions had 7 aspirants, of these, 5 turned up and 2 are expected on day 2. Those that were nominated for Kadongo Kamu included Lord Fred Ssebata and Nabwami Grace. Katende Abdul AKA Abdul Mulaasi is expected to be nominated on day 2.

The Electoral Committee will announce the official dates for the general elections in due course, according to Geoffrey Ekongot, the UMA Electoral committee chairman. He however adds that after nomination, they are free to campaign.

“Upon successful nomination, the candidates will be free to campaign,” he said .