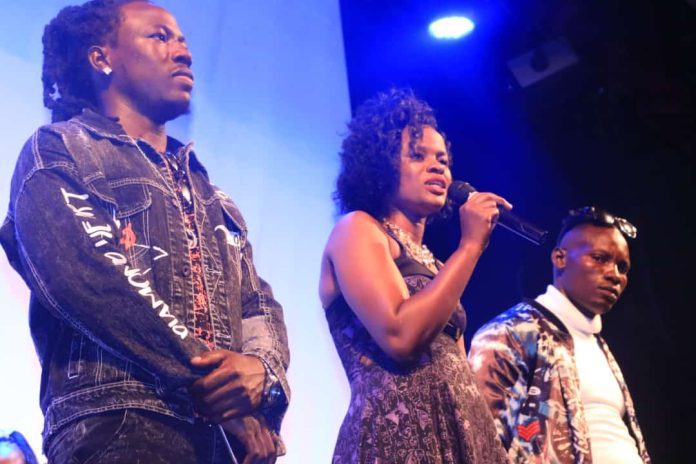 Jane Nambasa, the Chief Executive Officer (CEO) of Uganda Federation Of Film Industries (UFMI), an organisation that regulates Film makers in the Country is in hot soup.

Spiners has learnt that Nambasa felt the pressure last week and resigned from her position over alleged mismanagement of millions of shillings meant for Film Makers emoluments from copyrights royalties.

Nambasa resigned together with the organisation `compliance officers` over alleged misuse of office especially the finances, basing on powers contained in section 75 of the Copyright and Neighbouring Rights Act, 2006 and the Regulatuons made in 2010.

According to one of the film makers who maintained to stay anonymous, he alleges that Nambasa and her colleagues have been using almost 90% of the revenue obtained from collecting royalties by themselves but only remitting to rights holders just the remaining 10% which itself wasn’t as well flowing in consistently. This film makers says that such an action is far and below the acceptable standards and that Nambasa`s resignation was over delayed for “ages”.

Uganda Registration Services Bureau(URSB), the directorate of intellectual property in Uganda and in this case the regulator of UFMI and other Collective Management Organizations(CMOs) like UPRS for musicians and URRO for book publishers and authors maintains that they are handling this matter in a right way and an inquiry is already set-up to do thorough investigations.

“Our inquiry will ensure of a smooth transition and will make sure that matters will be handles within the strict confines of the law, transparently, with good governance standards as well as achieving the objectives of its establishment in the interests of its members and all other stakeholders”, an official from URSB informed this website.

This comes after 3 years when James Wasula, who held the same position as Nambasa in UPRS was suspended by URSB over exactly the same claims. Wasula for many years was battling with several musicians who did not subscribe to UPRS.

UPRS then put the management under “independent professional caretakers” like Kabiito Karamagi and Rita Baguma Birungi of Ligomarc Advoactes to temporarily oversee the management of UPRS but to some performing artists, they say that there isn’t any difference whatsoever and they wish for another overhaul for the affairs to get better.

Now Ugandan filmmakers are also accusing Nambasa of alleged colluding with other officials both in UFMI and URSB to pocket millions of shillings they collect from rights users.

“We are very sure that Nambasa has been giving out licences to rights users across the Country and she has been collecting loads of money for now 5 consecutive years but we have never been called at their offices to receive our shares”, a one Film Maker informed this website.

Early in 2018, a group of seventeen artists in Uganda’s Movie Industry, led by Julius Bwanika and Gerald Sserunjogi, filed a case against UFMI and URSB in the High Court of Uganda (Bwanika Julius and Ors v. Uganda Registration Services Bureau & Uganda Federation of Movie Industry, Misc. Cause. No. 083 of 2018).

The case was filed by way of an application for judicial review to compel a Government Institution to abide by its duties. In a nutshell, the prayers before Court were for URSB to fulfill its statutory obligations as a supervisory body over Collecting Societies in Uganda and reign in on UFMI; and for UFMI to furnish accountability over its activities as well as terminate illegal issuance of licenses to audio-visual vendors. Opportunities for resolving the matter through mediation were explored without success and towards the third quarter of 2018, the parties went back to Court.

On the face of the case, it was clear that UFMI had been flouting some of its obligations under the law (CNRA). For instance, there was no record of audited accounts; no records on income and expenditure; no establishment of a Provident and Benevolent Fund; and, no provision of a security device on all audio-visual recordings under its membership. Meanwhile, URSB too, had not been cracking the whip on UFMI.

In his judgment delivered in mid February 2019, his Lordship Justice Musa Ssekaana  guided that the“1st Respondent (URSB) should render guidance to the 2nd Respondent (UFMI) on how to make or amend the Constitution that would govern and include all the members.

The judgment states further that “it was wrong to merge a federating body with a Collecting Society because the two institutions do totally different works and as such, cannot be merged whatsoever. The single role of a Collecting Society is to collect royalties and distribute them on behalf of their members. The membership for a Collecting Society of Audio Visual Society [sic] in this case should be restricted to either producers or performers.”

The final nail on the UFMI coffin is when the judgment states that: “The 1st respondent (URSB) should consider separating societies like in some jurisdictions by having a Society for Authors, performers and Producers because the nature of interests from the rights holders is normally different and, as such, requiring the separation of Copyright holders and related rights holders. This is buttressed by the fact that it is only authors, producers and performers who are entitled to equitable remuneration as provided under Section 31 of the Copyright and Neighbouring Rights Act of 2006. The solution in this case would be that URSB which is the one that issues Collecting Society licenses, calls on fresh applicants with knowledge and experience in copyright management to take on the roles of a Collecting Society for the Film Industry.” Essentially, Justice Ssekaana was agreeing with the Petitioners that UFMI needs to be disbanded because in its current format, it cannot play the role of Collecting Society for different categories of artists within the movie industry.

This ruling on the disbandment of UFMI thus had to leave Uganda with only two Collecting Societies – the Uganda Performing Rights Society for music artists and producers of audio-visual works, and the Uganda Reproductive Rights Organization for book publishers and authors.

It was shocking to see UFMI re-operate under URSB`s guidance yet the judgement had stated otherwise and in Feb 2020 in one of UFMI`s operations on ground to ensure copyright compliance saw a one movie vendor Hawah Namyalo commit suicide after getting haunted by such operations that where not supposed to happen in the first place had URSB done its job as aforementioned.