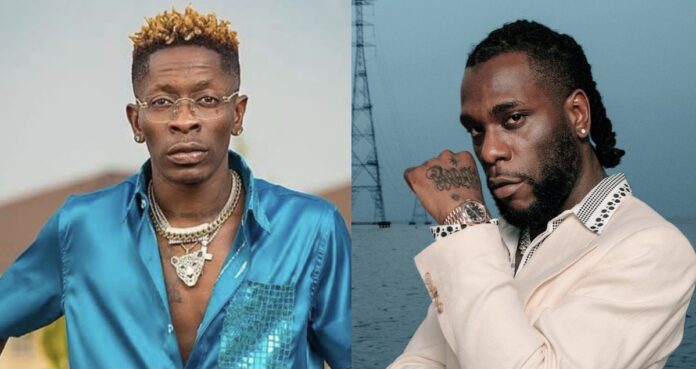 Ghanaian superstar Shatta Wale and Nigeria’s Burna Boy who used to be very close friends are currently fighting dirty on social media and both of them are revealing each other’s dirty secrets.

For those who didn’t know, it is alleged that Shatta Wale had a mental breakdown on Monday last week and took to Twitter to accuse all Nigerian musicians of being “upcoming” and “one styled”. The “Already” crooner said Nigerian artists were not appreciative of the support shown them by Ghanaians, tweeting: “Learn to say thank you, Ghana has always been your gateway.”

Accusing Nigerian artists of “failing to promote Ghanaian artists”, Shatta Wale said, “As for Nigerians they think they can always say what they want to say Fuck your talks ya’ll who think I spoke the truth this, I don’t even remember you guys promoting Ghanaian artiste in your country, until u guys will realize your artiste blow in Ghana to say thank you ..F.”. Burna Boy, in one of his posts on his Instagram story alleged that Shatta Wale s.exually molested a lady he once brought to Ghana and this triggered Shatta Wale to come out revealing chilling and dirty secrets about Burna boy.

This comes days after Shatta Wale challenged Burna Boy to a freestyle battle at the Accra Sports Stadium where Burna is rather only open to one-on-one fight with him. “This guy thinks I have time. @Shattawalenima, this ain’t 8mile! No be rap battle. It’s a fist battle. The type real men do. We can do it anywhere you want. Behind closed doors or in stadium for the world to see,” Burna wrote in a now-deleted post via his Instagram Story.

Despite Shatta Wale’s outburst, Burna Boy said he remained committed to building a stronger Africa, saying “Nobody will ruin the unity we continuously try to build for a stronger and better Africa.” On Sunday, Burna Boy went ahead to tender an apology to his fans for his involvement in this public spat with Shatta Wale online. In his apology, Burna Boy expressed his disappointment for letting himself be dragged into Shatta Wale’s recent shenanigans.

In his apology to his fans, Burna Boy stated that he was dragged into the fight by Shatta Wale and he should have known better. He also promised not to let himself be dragged into a situation like this again, and also stated that he will not be using his social media for the rest of the year.