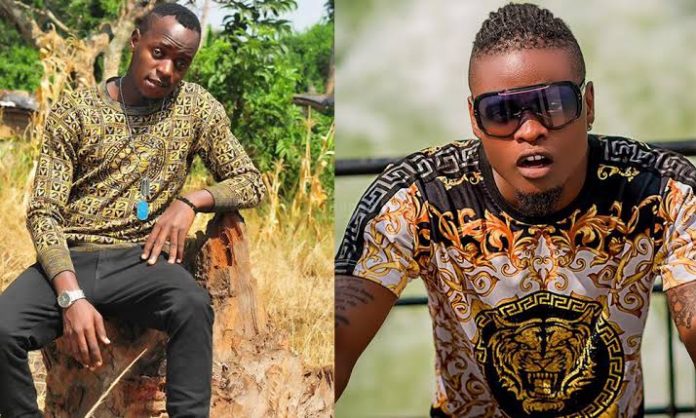 World over, the roles of artists and managers are very different. Artists are motivated by creativity and fueled by a love for the craft. Managers are business-driven and goal-oriented, committed to finding the best opportunities for their artists and handling all the business aspects that come with it. Without the right balance, there can be a disconnect between between the two. Artists want to stay true to their creative and artistic ideals, and managers try to influence them to do what’s going to help them reach their goals in the long run.

Right about now, its quite so unfortunate for Uganda`s music industry as singer Pius Mayanja commonly know as Pallaso and his manager Ivan Lubega alias Karma Ivien are having a kind of a regrettable dispute after the latter decided to sue the former for what he reffered to as a breach of contract.

A breach of contract in legal terms is a violation of any of the agreed-upon terms and conditions of a binding contract and holds weight if taken to court. If it can be proved that a contract was breached, the remedy would generally be to give the victim in this case Karma Ivien what he was initially promised by the “Malamu” singer. In Uganda`s laws, a breach of contract is highly considered a crime and punitive damages are awarded for failing to perform promised obligations.

How It all started

According to our reliable sources, Pallaso allegedly sacked Karma Ivien from his managerial team and Ivien never took this lightly thus moving ahead to task his lawyers to take legal action against Pallaso for breach of contract.

Ivien told our reporter that him and Pallaso have an ongoing contract but the artiste has refused to cooperate with him.

“After a long time of negotiation with my brother Pallaso on his current conduct of working without a manager yet we have an ongoing contract, he has refused to cooperate and I have been left with no other choice other than engaging my lawyers M/S Ochieng Associated Advocates and Solicitors to take this matter to court. I am ably informed that my brother has arrogantly refused to receive the summons to file a defence but my lawyers know what to do,” he stated.

Through his lawyers M/S Ochieng Associates Advocates, Pallaso was summoned to court and is required to file a defence within 15 days from the date of the summons and on Thursday he confirmed to the media of how he can never get shaken with Ivien`s move plus revealing of how he is a born fighter ready to fight for all what he thinks belongs to him under any given circumstances.

Pallaso and Karma went into an agreement in 2019 after the latter had just fallen out with rapper Fik Fameica.

We are yet to know of how this legal case will get resolved but we can rather pick a few lessons that can help our entertainment practitioners especially artists and talent managers get in harmonization and not go the Karma-Pallaso way;

The most important member of our any Ugandan artist is their manager. They are also the most important agreement a musician will sign is an Artist Management Agreement. Ugandan talent Managers have never played a more important role in the music industry than they do today, and a good manager will likely have a greater impact on a Ugandan artists` career than any other person on their team.

The fact is that very few jobs in Uganda’s music industry require a certificate. Becoming an Artistes manager in Uganda doesn’t need a university degree, or even that you’ve finished school – and anyone can call himself or herself a manager.

After all, the relationship the artist has with their manager is usually the most important one they’ll have. The manager is the one person who is supposed to defend you and protect you, looking out for your best interest when dealing with the media, agents, promoters, and record labels – you can see the potential for conflict of interest if the Karma also worked for their label.

Its like a marriage (American singer actually did marry her manager), and when it goes wrong it can get just as messy as an actual divorce. Another American singe Britney Spears’s dad sought to maintain a restraining order against his daughter’s former manager, Sam Lufti, stating in court: “When [Lufti] was in so-called control, she’d lost everything – her kids and career. I believe he’s a predator, I believe he’s very dangerous to her.”

It can be tempting for artists to leave the business issues to the managers so that they can focus on making music. But the shrewdness that comes in handy when negotiating deals can also be turned on the artist the manager is representing.

A bonus point for Ugandan artists: don’t take legal advice from the manager’s lawyer. Ever. This might seem obvious but it happens more often than you’d think and would be totally unacceptable anywhere else besides the music industry. If your manager doesn’t want you to obtain legal advice on the contract, that is a major red flag.

Final thought: the most important thing any Ugandan artist should consider before working with a manager is, what does your gut instinct say about the person? That’s as significant as any legal clause and is where you should begin. All the negotiating in the world won’t leave you with someone you enjoy working with on a daily basis. Once that box has been checked, take the contract to an experienced entertainment lawyer, and create a deal that opens rather than closes doors for you.