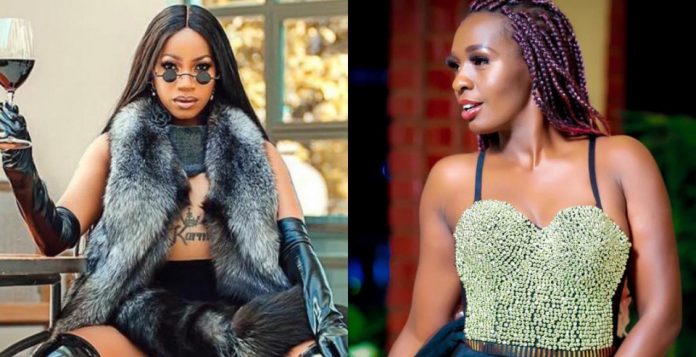 Growing up, we always thought things would happen in a certain order: meet a guy, fall in love, move in together, get married, have kids, and live happily ever after.

These days, having kids without getting married is no big deal, and singer Sheebah Karungi is one of those who believe so.

Over the years, former TNS singer Sheebah Karungi has revealed her negative attitude towards men and marriage altogether.

Speaking during NTV`s “MwasuzeMutya” hosted this time around by Ruth Kalibala ahead of her concert in December this year at Serena Hotel, Sheebah once again opened up about her idea of having kids but not getting married.

According to the Ice Cream singer, the only thing that is delaying her having kids is that she is actively investing to be able to accumulate wealth.

“I come from a very poor family and I am the last born. Since I am one of those who have been blessed, I want to accumulate wealth that will last for many generations to come, “Sheebah said.

“I am not in a rush to have children. I will get them when I feel like it,” she added, before revealing that currently, her focus is on venturing into various businesses.

Meanwhile, despite the singer’s wanting to have kids, she said that she would never get married.

“I’ll never get married, but I am confident I will get a man that feels just like me. We shall have kids and raise them, “she said.

Sheebah further explained that her man will be staying at his own home as she also stays at her Munyonyo mansion.

Sheebah also admitted that she once adored her longtime nemesis Cinderella Sanyu, also known as Cindy.

Sheebah claims that when she decided to leave the dance group she had joined in 2007, Obsessions, she got in touch with Cindy and asked her to write a song for her.

“I was a fan of musician Sanyu Cindy. I looked for her and asked her to write me a song that I wanted producer Washington to work on,” said Sheebah.

The song, titled “Ngenda Kunyenyeza,” reportedly failed because Sheebah was just beginning her solo career at the time.

“I had a lot of panic recording this song considering that I never sang much in the Obsessions,” she said.

She said she was “segregated” while she was with Obsessions.

“I had a lot of panic recording this song considering that I never sang much in the Obsessions,” she said.