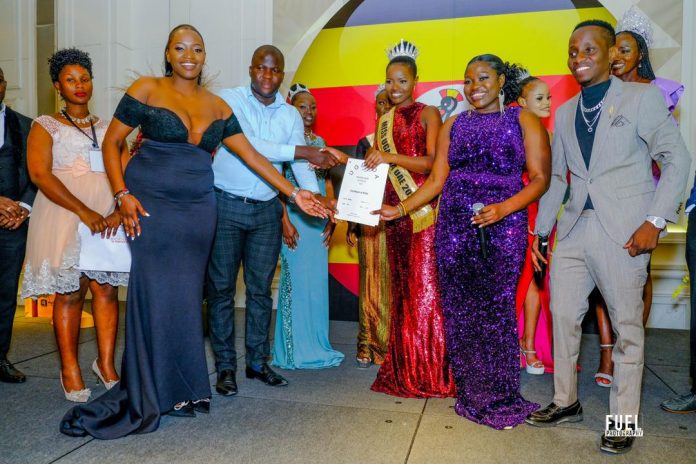 Over the weekend, the Ugandan community in the United Arab Emirates (UAE) led by Ashley Tours and Travel held the exciting 2022 Uganda-UAE at Hyatta Regency, Deira in Dubai that also anchored a Beauty Pagent that got the Miss Uganda, UAE getting crowned.

Leila Namubiru emerged the winner of this beauty pageant and walked away with a land title courtesy of B Clara H Property Services Ltd that is worth UGx 8 Million.

Namubiru will now represent Uganda at numeropus Global events and also spearhead various projects that will aim at uplifting Ugandans in U.A.E in various aspects.

MC KATS, CEO MC KATS FOUNDATION and TV presenter Caroline Marcah were also on board for the Convention whose theme was “Youth Against HIV/AIDS” and later on officiating the beauty contest as MC Kats spared time to sensitize the audience on how to live a safe life and avoid contracting HIV retelling his own experience of how he has managed to pull it out through for all these years.

The contest wasn’t mainly focusing on looks, but on being a role model for other young people with HIV, on being able to advocate for the needs of young people, and to increase acceptance and understanding of young people living with HIV in society, especially Ugandans in UAE.

Before the event as the organisers were speaking out at the press conference that was hold back in October, it was announced that many Ugandans in UAE are living in fear after contracting AIDS as some even get infections in their places of residence popularly known as ‘Bed Space’ which prompted the organisers to raise awareness of and help the many victims.